This workbee was often deployed at Deep Space 9 during the 2370s, and was often accompanied by an nearby alien freighter. (Star Trek: Deep Space Nine opening sequence Season 4-7; DS9: "Hard Time", "The Muse", "For the Uniform", "Doctor Bashir, I Presume", "A Simple Investigation"; DS9: "Ties of Blood and Water", "Resurrection", "His Way", "Profit and Lace", "Afterimage"; DS9: "Treachery, Faith and the Great River", "Covenant", "Inter Arma Enim Silent Leges", "The Changing Face of Evil")

These workbees were used in the spacedock in Earth orbit the USS Enterprise was refitted at in the mid-2270s. (Star Trek: The Motion Picture) 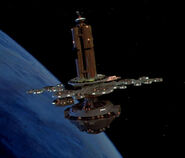 This workbee assisted equipping the USS Enterprise-B prior to her maiden voyage in 2293. It was departing from one of the ship's torpedo bays shortly prior to launch. (Star Trek Generations)

These workbees were in used at the Utopia Planitia Fleet Yards just before the USS Voyager was transfered to Earth Station McKinley in 2371. (VOY: "Relativity")

This workbee was on display at a Vulcan museum on Vulcan in 2380. (LD: "Veritas")