Boraalan; Starfleet officer; Vic's Lounge patron
Uriah Carr is an actor and writer who was a regular background actor on the last three seasons of Star Trek: Deep Space Nine. In addition he worked as stand-in, body double, and photo double for Alexander Siddig and appeared in at least one episode of Star Trek: The Next Generation. As a background performer he received no credit for his appearances.

As stand-in and photo double he appeared in the wide shots of the baseball scenario in "Take Me Out to the Holosuite", stood-in in several episodes, including "Strange Bedfellows", and worked as second unit hand double for Siddig in close-ups of "When It Rains...", "Tacking Into the Wind", and "The Dogs of War".

Carr, a North Hollywood resident, worked as writer and director on the 2006 science fiction short film The Purple Zone. He also wrote several stage plays, including "Going Soft" (the second part of "Opposite Worlds") [1], "The Right Place", "Show Me Love!!", "Earth Mother", "Prep School Summer", and "Poverty" for the Actor's Workout Studio. In "Going Soft", Carr appeared on stage and directed as well.

In 1989, he had a background role as a desk worker in the Falcon Crest episode "Charley" which also features Sierra Pecheur, Carl Ciarfalio, Allan Graf, and Jimmy Ortega and was directed by Reza Badiyi.

In 2013, Carr appeared as a party guest in the Two and a Half Men episode "Justice in Star-Spangled Hot Pants" and in 2014 he appeared as a cafeteria patron in The Big Bang Theory episode "The Relationship Diremption". 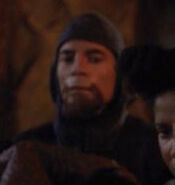 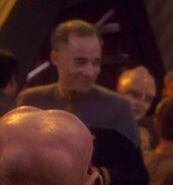 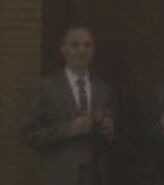 Farewell party guest
DS9: "What You Leave Behind"
(uncredited)