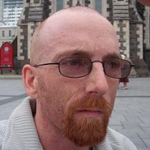 I'm not really spending a lot of time here anymore, although I have recently been using the information to help with the creation of Star Trek series information at LibraryThing. It seems that I cycle through websites on an irregular basis, obsessing about something new every few months.

I've watched Star Trek since either 1989 or 1990 when Star Trek: The Next Generation first started airing here in New Zealand and I saw Haven with my father. Apart from Star Trek: The Animated Series (which may not have aired here at all) I think I've seen practically everything I've had the opportunity to, apart from season 2, 3 and 4 of Star Trek: Enterprise and the occasional random episode. Since I became aware of it I was irritated by the fact we were receiving episodes around two years behind the US. Enterprise only got past the first season free to air at some point last year I think and that was around noon on Sundays, while I'm at church, so I have yet to see anything past season 1.

I seem to keep my personal library at around 40-45% Star Trek novels (currently 247 of 598) without consciously intending to. The only unread books are parts of series that I don't have completely, yet, and I've also read all the others I found at my local libraries while I was still visiting them. I need a much bigger bookcase (or several) and the physical space to put them in before I'll have easy access to most of my other books.

I am not likely to be starting many articles or contributing much new information, mostly I'll be fixing errors with links and adding more as I see the lack.

I started using the Robot Co-op services at All Consuming and Lists of Bests in 2005 or so to keep track of what I read and watch. (Like almost everywhere I have some sort of presence online my username is Avron there as well). Unsurprisingly (to me at least) there has been a significant number of Star Trek related books and DVDs on the lists. LibraryThing has (since August 2007) superseded them as far as book tracking is concerned.

DVDs, Books and other Trek stuff I own (this will need updating, once I stop buying more books at TradeMe)

I decided (when I was spending a lot of time here) that my pet peeve (out of everything that happens here) was the Rank / Name mislinking that I sometimes felt I was finding on every third article.

To add births and deaths

Retrieved from "https://memory-alpha.fandom.com/wiki/User:Avron?oldid=1192618"
Community content is available under CC-BY-NC unless otherwise noted.