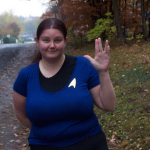 I'm a lady in her 30s who is seriously obsessed with all things Trek. Even the Abrams stuff, although I'll turn into one of those stereotypical nerds if you get me started on Into Darkness!

Star Trek: The Next Generation:

And to cut this short, I've only seen the following episodes of S7

I have not seen any of Star Trek: The Animated Series.

My favourite episode is "In the Pale Moonlight", followed by really any episode Garak appears in, as well as any Mirror universe episodes.

Retrieved from "https://memory-alpha.fandom.com/wiki/User:Fleurdelista?oldid=1588891"
Community content is available under CC-BY-NC unless otherwise noted.