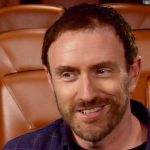 Star Trek: Enterprise Producer Mike Sussman has been writing adventures set in Gene Roddenberry's universe since he was eight years old. Sussman was born in Philadelphia, but spent most of his youth in the Gulf Coast resort town of Sarasota, Florida. After studying film and screenwriting at Florida State University, Sussman began his television career as a newscast producer.

Sussman made his first professional sale to the Star Trek franchise in 1995, creating the story for the acclaimed Star Trek: Voyager episode "Meld". After several freelance sales, Sussman joined the writing staff of Voyager in its seventh season, co-writing such episodes as "Body and Soul", "Author, Author" and "Renaissance Man". He then joined the staff of the latest chapter in the Star Trek saga, Enterprise, writing or co-writing some of the series' most popular (and controversial) installments, including "Twilight", "Future Tense", "Regeneration", "Kir'Shara", "Affliction", "Babel One" and the popular Mirror Universe two-parter, "In a Mirror, Darkly". All told, Sussman's name appears in the writing credits of more than 30 Star Trek episodes. After Enterprise, Sussman was hired as a writer and Supervising Producer on Brannon Braga's short-lived CBS alien-invasion drama series, Threshold. Sussman was also a writer and producer on Sam Raimi's Legend of the Seeker, an hourlong syndicated series from Disney-ABC Domestic Television and ABC Studios. As of 2014, he is a creator and Executive Producer of the TNT drama series, Perception.

Retrieved from "https://memory-alpha.fandom.com/wiki/User:Mdsussman?oldid=1599610"
Community content is available under CC-BY-NC unless otherwise noted.