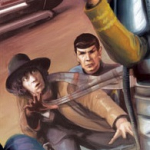 My name is Noah Tall. Actually that's not my real name but the truth is my real name is unpronounceable, just like the Andorian name for God. I'm not Andorian though. I'm from Kataan. When I learned that my world was doomed I built a spacecraft that sent me Earth. I've been here ever since. I was lucky enough to learn that my lifespan was much longer here on this planet, which made me happy.

I have been posing as a science fiction nerd living in Wichita, Kansas, and I also love comic books, pizza, hamburgers, peanut butter ice cream, Chinese food, rock music, girls, Superman, Godzilla and other stuff. I try to hit the comic conventions when I can. There is a Transformers convention in my hometown that I hit up as well. I actually met Frank Welker...well no...not yet, but I did talk to Garry Chalk about him. Garry's famous, he was Optimus Prime/Primal in the Transformers franchise. Anyway, yes, there does need to be a Transformers/Star Trek crossover since Paramount Pictures is doing both franchises, and yes, they do need to cross Star Trek over with Doctor Who. (That would be awesome!) Might as well have Terminator crossover with Star Trek too because the last film was made by Paramount.

But anyway, now that I got that out of the way, man I love Star Trek! Can't remember a time when I didn't! I consider myself a hardcore trekkie, not that I don't like Star Wars, but I like Trek better. Always have. That being said, I'm not a biased fan. I'm not of the opinion that Star Trek has to be made a certain way. There's some fans that say Star Trek should only be about the human condition, and others say that true Trek is about space exploration. And then there's the countless people out there bashing the J.J. Abrams films because they were action movies. Guess what, I like 'em all baby!

You see, Star Trek isn't about any of those things. It's about whatever the writers/producers/directors want them to be. There's room in the Star Trek universe for all kinds of settings and storytelling. My biggest concern is that Star Trek stays alive, and with the new series on the horizon, it looks promising. The films should be different than the series, that's just logic speaking in my opinion, because the films are supposed to be larger scaled. I'm not really a fan of Star Trek: The Motion Picture and I really don't want to go back to that. The other films are fine, and I'm cool with whatever comes, but why not just sit back and enjoy it instead of complaining about it.

The truth is there's been a serious need for Trek on TV these days...it's like we're starving. The films are just dessert, but we need our dinner. Anyway, it's coming back...be there at CBS All Access!! I think it's the absence of Trek on TV that's making everyone not appreciate the films so much. My advice would be to watch Doctor Who in the meantime, if you have Hulu or Netflix, because that show is almost as good (sometimes just as good) as Star Trek. If not just watch the Star Trek shows again. There all there too. Anyway, not much else to say other then the fact that I hope that Star Trek continues to live long and prosper.

Check out my contributions!

Retrieved from "https://memory-alpha.fandom.com/wiki/User:Noah_Tall?oldid=2614493"
Community content is available under CC-BY-NC unless otherwise noted.