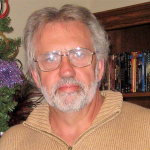 Sir Rhosis (born 28 January 1964), primarily a fan of "Star Trek", lives in Cincinnati, Ohio. His main contributions have been in the area of background information on the stories and writers, primarily by using the various drafts of scripts and story outlines he owns.

Thus far, he has contributed brief bios of several TOS writers (Jud Crucis (Don Ingalls), Jean Lisette Aroeste, Jerry Sohl and Joyce Muskat, to name just a few), and has contributed information to the bios of Harlan Ellison, David Gerrold, and Gene L. Coon. Other contributions include original titles for various episodes and films and many bits of plot information included in early draft and shooting scripts which were deleted, unfilmed or edited out prior to transmission (examples: the possible pirated origin of the Romulan Bird-of-Prey ship, the reunion of Benjamin Finney and Jame Finney in "Court Martial", etc.).

His synopses of various TOS script drafts can be found at: http://www.fastcopyinc.com/orionpress/articles/unseen.htm

An aspiring screenwriter, he pitched, unsuccessfully, to Star Trek: Deep Space Nine in 1995, and has placed high in national screenwriting contests.

Retrieved from "https://memory-alpha.fandom.com/wiki/User:Sir_Rhosis?oldid=2385380"
Community content is available under CC-BY-NC unless otherwise noted.