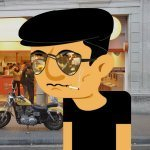 Two major systems crashes later, the book is coming out next month.

A year on and my Startrek tapes are still packed. This new place doesn't have the storage space of our last one, in Neuchatel.

My book is still not out, on legal advice. I have to complete my last divorce yet. In the US (TX), it doesn't matter that you haven't seen the ex in 6 years, they still can get half. That will happen by this summer and I will then turn around and marry my current partner. (Silly, I know but love does that.) --The Slamlander 09:21, 28 May 2008 (UTC)

I am The Slamlander but my friends call me Slam or Slammy. I should be the only Slamlander on the Internet.

Yes, "The Slamlander" is an online branded identity that has no connection to my real ID. There is a serious reason for this. Being Net.Famous sucks, it brings out all the wormridden nut-jobs. I don't want anything I do on the Internet, coming back to haunt my real life, as has happened a few times before.

After reading this, should you chose to have nothing more to do with me, that's okay too. If you think that all of the above is either self-agrandisement or just plain false then brother; rest soundly in your delusion but don't be too bothered by being dead wrong. If this page intimidates you then grow a backbone and deal.

I am an American living abroad, in Europe. Since many of you are in the 'States', please have patience with my response times. We are, after all, on different sleep cycles.

What I hope to do hereEdit

I have been a ST fan since I saw the original shows, on the air, in the 60's, in Los Angeles, CA, US. My GF and I have a complete collection of every ST episode ever filmed and all the movies too. The only thing we don't yet have are the DVDs for Enterprise.

Why do I do thisEdit

Let's face it, Europe has lousy programming and they don't even get a part of the good stuff, like the Stargate series, etc. To make matters worse, they don't do video rentals either. Not to mention that I am in Swiss Romande, the French-Speaking part of Switzerland. The French do not like SciFi much. Ergo, the only way I get to watch new material is to buy it from Amazon. I have seen all of my ST collection at least 2-3 times each. I know them. This allows me to watch them with a new slant, that of an archivist.

If you want to talk to me see my Livejournal website or send me email. Both links are listed at the top of this page, in the sidebar.

Retrieved from "https://memory-alpha.fandom.com/wiki/User:Slamlander?oldid=1307450"
Community content is available under CC-BY-NC unless otherwise noted.