View source
watch 24:28
Star Trek Timeline [INTERACTIVE]
Do you like this video?
Play Sound
For the similarly named eye protection devices, please see Visor.
"Naturally, I've heard of your case. The VISOR appliance you wear is…"
"Is a remarkable piece of bio-electronic engineering by which I quote "see much of the EM spectrum", ranging from simple heat and infrared through radio waves, etcetera, etcetera, and forgive me if I've said and listened to this a thousand times before."
– Beverly Crusher and Geordi La Forge, 2364 ("Encounter at Farpoint")

The VISOR (an acronym for Visual Instrument and Sensory Organ Replacement) was a medical device used in the Federation to aid patients who had either lost their eyesight or were born blind. (TNG: "Encounter at Farpoint")

The result was a vastly different visual acuity, with VISOR-wearers able to see in the infrared and ultraviolet ranges and beyond. To Human eyes with good vision, the images relayed through the VISOR could seem disorienting and unfamiliar. (TNG: "Heart of Glory", "The Enemy", "The Mind's Eye")

In 2257, the transporter operator of the USS Discovery wore a VISOR with a cable retention system. The apparatus included the typical eyepiece plus components fitted over the head and down the wearer's neck. (DIS: "Brother")

Walter Klassen FX posted behind the scenes photos on 3D printing the Discovery VISOR on Instagram. [1]

In the 24th century, Geordi La Forge, born blind, was given his first VISOR after his fifth birthday. (TNG: "Hero Worship") The VISOR he wore in 2364 was banded in silver metal with golden tines, alternating in placement from the top and bottom bands. (TNG: "Encounter at Farpoint") In 2365, La Forge began wearing a new VISOR, which had tines stretching from the top to bottom bands equally. (TNG: "The Child") By 2373, La Forge had begun to rely on ocular implants which eliminated the need for a VISOR. (Star Trek: First Contact)

According to the script of TNG: "Identity Crisis", La Forge wore "a slightly different, earlier version of his VISOR" in 2362 while still serving on the USS Victory. It is a little hard to see in the few scenes that show La Forge during that year, but it seems that he is wearing another VISOR in the episode. His VISOR in 2362 was completely silver in contrast to the two versions he regularly wore in the series, each of which had silver bands and golden tines.

While the Cerritos was assisting the USS Vancouver on a diplomatic mission to Mixtus III that involved imploding a moon, Ensign Brad Boimler brought his girlfriend, Lieutenant Barbara Brinson a teddy bear that was clad in an Operations gold uniform and a VISOR. (LD: "Cupid's Errant Arrow")

The 2360s model detected electromagnetic signals across the entire EM spectrum between 1 Hz and 100,000 THz and transmitted those signals to the brain through neural implants in the temples of the individual via delta-compressed wavelengths. A bank of preprocessors uses a pulse compression routine to compress the data stream into pulses so that it doesn't overload the senses. (TNG: "The Masterpiece Society")

The VISOR proved useful in unique applications from time to time. La Forge used the VISOR to:

While trapped on the surface of Galorndon Core, La Forge and Centurion Bochra were able to couple La Forge's VISOR with a Federation tricorder to detect a class 3 probe with a neutrino beacon to transmit their location to the ship in orbit. (TNG: "The Enemy") While being held hostage on Arkaria Base, the crew of the USS Enterprise-D reconfigured the VISOR to emit a hypersonic pulse to incapacitate their captors. (TNG: "Starship Mine")

One of La Forge's spare VISORs was among a variety of objects that Berlinghoff Rasmussen tried to steal from the crew of the Enterprise-D when he was visiting the ship in 2368. (TNG: "A Matter of Time")

La Forge once joked that he could see through a certain type of playing card, while explaining to Worf how he knew his cards. La Forge then dismissed the joke, though, stating that he only peeked at the cards after the hand was over. (TNG: "Ethics")

The VISOR inadvertently caused several problems as well. Using it caused La Forge physical pain, a result of his natural senses conflicting with the artificial sensory input from the device. Dr. Beverly Crusher offered him the options of either painkillers or exploratory surgery to desensitize the areas of his brain that were being affected, but La Forge declined both because they would interfere with the operation of the VISOR itself. (TNG: "Encounter at Farpoint") When Romulans kidnapped La Forge in 2367, they were able to use his existing neural implants to tap directly into his visual cortex and secretly brainwash him. As the VISOR was capable of receiving E-band emissions, a collaborator was able to remotely control the brainwashed La Forge with an E-band transmitter. (TNG: "The Mind's Eye")

When activated, the VISOR emitted a short-range subspace field pulse. While usually harmless, this emission caused Worf to shift between quantum realities in 2370, whenever he was in close proximity with the device; the pulse aggravated a quantum flux that Worf began experiencing after he came into contact with a quantum fissure. (TNG: "Parallels")

In 2371, Doctor Tolian Soran modified La Forge's VISOR to transmit a live video feed of his range of view to the Duras sisters' ship. Lursa and B'Etor used the footage to discover the Enterprise-D's shield frequency. (Star Trek Generations)

The idea of the VISOR was thought up by David Gerrold, who also suggested La Forge's blindness. "I envisioned Geordi La Forge with some kind of eye treatment; maybe just a couple of enlarged lenses that you put over the actor's eyes," he recalled. (The Fifty-Year Mission: The Next 25 Years, pp. 98-99)

Gene Roddenberry likened the VISOR to the tricorder, since both tools provided sensor capabilities. (The Fifty-Year Mission: The Next 25 Years, p. 99)

The art staff assigned to Star Trek: The Next Generation spent three months working on possible designs for the VISOR. (Star Trek: The Next Generation Companion (3rd ed., p. 21)) After several test models of the device were produced, Scenic Artist Michael Okuda brought a plastic banana clip – which generally fits over a girl's or woman's head – into the production, one day, having discovered it could be used to represent the VISOR. (Herman Zimmerman, TNG Season 1 DVD special feature "The Making of a Legend", part "VISOR") Re-manufactured to fit actor LeVar Burton's face, it retained some elements from illustrator Rick Sternbach's designs. Despite these embellishments, many fans quickly guessed that the prop took its inspiration from a banana clip. (Star Trek: The Next Generation Companion (3rd ed., p. 21)) In addition, David Gerrold wasn't satisfied with the result either. "They went with the air filter look, which I totally did not like," he lamented. "You cover up too much of an actor's eyes and he's got nothing to work with." (The Fifty-Year Mission: The Next 25 Years, p. 99)

It was Michael Westmore, Jr. who proposed having connection points on the sides of La Forge's head, which was done using light-emitting diodes. His father, Make-Up Supervisor Michael Westmore, later recalled, "The idea for Geordi's LEDs came out of a conversation I had with my son as we walked across the Paramount lot to the production office. Michael, who had worked for me a few times in the past, thought we should have an interesting effect to indicate the contact point [....] So Mike, Jr. built a pair of little metal attachments that had flat bottoms and could be glued to Levar Burton's makeup. They had wires running through LeVar's hair and down the back of his neck to a small battery pack underneath his arm." (Star Trek: Aliens & Artifacts, p. 70)

A tiny filament stretching from the VISOR prop to behind LeVar Burton's ear was used to keep the prop attached to his face. By looking closely at some episodes, including "Home Soil", the filament can be seen. 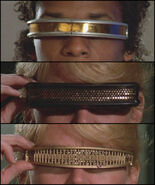 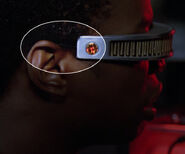 In 1999, the VISOR influenced the creation of an optical viewing device that was developed based on NASA technology to help the visually impaired see and read and was named JORDY (Joint Optical Reflective Display) after Geordi La Forge. [2]

In 2016, pop singer Rihanna (in collaboration with French fashion label Dior) developed a line of sunglasses inspired by La Forge's VISOR. She commented, "I've always been obsessed with his [La Forge's] eye wear." [3]

The novel Ghost Ship established that the VISOR was a very taxing prosthetic to wear because of the amount of energy it used and the painfully large amount of information it sent to the Human brain. La Forge was one of the few individuals who was able to successfully function with a VISOR.

In the novel Foreign Foes, La Forge needed to have his VISOR and associated implants removed after eating Velexian grain. This grain was actually composed of small machines that were designed to help heal an individual according to their DNA. As La Forge's DNA did not contain any information about his implants, the machines attacked the implants, requiring Dr. Crusher to remove them. After several days the machines stopped working, and La Forge was sent to a starbase and had his implants successfully reinstalled.

The eBook The Insolence of Office established that, given the incidents of La Forge's VISOR being used against him, Admiral Hayes declared the VISOR a security risk and gave La Forge the choice to either undergo ocular implant surgery or be transferred to a less sensitive post.