The Kazon fighter was a design by Dan Curry. At the time, the production team of Star Trek was spread thin as several productions were in various stages of development (Star Trek Generations, TNG: "All Good Things...", DS9: "The Jem'Hadar" and VOY: "Caretaker" as well as the documentary Journey's End: The Saga of Star Trek: The Next Generation). The regular design team for Voyager had their hands full hammering out the details for the USS Voyager and the Caretaker's array as was related in the book A Vision of the Future - Star Trek: Voyager. To ease the workload, Curry, whose regular function was that of Effects Producer, pitched in by tackling the Kazon ships, wanting to imbue the ships with that culture's "rough, low-tech retro" look. (Star Trek: Communicator issue 105, p. 59) For the same reason the build of the models, once the design was approved, was subcontracted out to an outside vendor, WonderWorks Inc., who delivered the models as per specification. [2] As one of the most junior employees at WonderWorks, Robert Bonchune was sent to deliver the miniature to the Star Trek motion control stage at Image G. There, he handed the model over to Curry, who wanted to make improvements to it. Curry therefore asked Bonchune to stay behind to help him distress the painting. Bonchune was thrilled to help paint the ship but figured he would likely have no more involvement with Star Trek, though fate intervened to prove him wrong. (Star Trek: The Official Starships Collection, issue 44, pp. 14-15)

"About six weeks into motion control photography, the producers decided to change the Kazon Fighter design. I mocked up possible design modifications for producers to look at.", David Stipes recalled. [3] Stipes embellished the studio model with various cardboard add-ons, among others the aft and front fins for assessment. Once approved, the modifications were made permanent at Tony Meininger's Brazil-Fabrication & Design. The modifications meant that the footage of the model, shot until that time, had to be re-shot in late October/early November 1994. (Star Trek: Communicator issue 105, p. 59) Part of the modification was the decision to have the model, which was originally conceived as a fighter craft only, to double as the as larger conceived Kazon raider as well. This was achieved by fabricating a cockpit module and a bridge module which were interchangeable on the model, confirmed by Rick Sternbach in private correspondence with Ex Astris Scientia, "I recall the model only vaguely. It was a Dan Curry design and I don't have any details, but essentially you're correct, the model was modified to be either one."

The late decision to have the model design modified was reflected in the release of Galoob's Micro Machines (Set 66128), which showed the fighter in the configuration of the studio model as originally delivered by WonderWorks.

When "Caretaker" was being filmed, neither module was used, either because they were not constructed yet or because they were not yet conceived. Instead, a smooth feature was applied to the area of the model where the bridge or cockpit were supposed to be in later episodes. As such, it can not be ascertained with absolute certainty what class of vessels the Kazon ships were intended to be in the episode, though the visual of Maje Jabin on his bridge suggested the larger class. In this configuration, the model is featured at Image G in the VOY Season 1 DVD special feature, "Red Alert: Visual Effects Season One", in which Curry discusses the filming of the models. [4](X)

As the role of the Kazon as main antagonists was played out early on in the series, no CGI version of the design was ever produced, the few later appearances being either stock footage or LCARS displays.

This CGI model and its various modifications made a total of five appearances on Star Trek: Voyager and one in Star Trek: Enterprise. The "Reptile Alien Ship" was designed by Rick Sternbach in July 1995. Constructed at Amblin Imaging, the ship was Voyager's first CGI-only starship design.

Originally designed for use in Star Trek: Voyager, where it had several appearances as different ships, and later used in Star Trek: Enterprise. 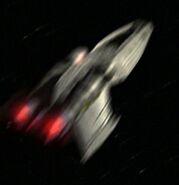 Benkaran shuttle
VOY: "Repentance"
Add an image to this gallery 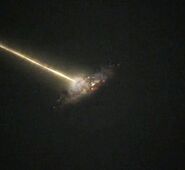 Vaadwaur ship
"The Void"
Add an image to this gallery

Annari warship
"Nightingale"
Add an image to this gallery

As a new design, the Devore warship made its first appearance in "Counterpoint". The CGI model [5](X) was designed and built at Foundation Imaging by Brandon MacDougall, who commented "The Devore ship was one Mojo asked me to design and model for Voyager season 5 episode "Counterpoint". I made some quick pen and ink designs on paper, Dan C[urry] and David L[ivingston] liked the direction and the rest was history. It was hard to make up my mind what way it would fly and I not sure even Mojo did know. Some of the cool things you do not see is a shuttle bay with yellow internal lighting and hydraulics doors." [6](X)

In later appearances, the model was scaled down to represent several smaller vessels of various alien races. It reappeared, otherwise unmodified, as a derelict in Abaddon's Repository of Lost Treasures, (VOY: "Alice") as one of the contestants in the Antarian Trans-stellar Rally, where it, true to McDougall's comment, flew backwards, (VOY: "Drive") as a stranded alien vessel, (VOY: "The Void") and finally as a Sphere-Builder vessel, type 1 as part of the battle. (ENT: "Azati Prime")

Contestant in the Antarian Trans-stellar Rally, 2nd from the right
VOY: "Drive" 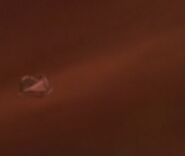 Originally slated to make an appearance in VOY: "Vis à Vis" as a "ship of the week", the "Chaotic space hulk" was designed and built as a CGI model at Digital Muse. "They might say "We're looking for some design where we want to have tentacles, but we don't want it to look like an octopus," or things like that. (...) When the team are called on to help with a design, everyone gets a chance, It's actually a free-for-all. I think with "Vis à Vis" we had to come up with three ship designs, but we probably submitted 10 or 12", John Gross remembered. Initially however, the design was one of the rejected ones, but was utilized in the later episode VOY: "The Fight". As to why it was initially rejected Gross further elaborated, "We ended up using it as the derelict ship in "The Fight". It was very organic, and it was something that didn't fit into the Star Trek universe. The reason it was able to be used in "The Fight" was because of the refracting space; the ship was so broken up you really couldn't see it very clearly. But I know Peter Lauritson likes to avoid having ships that look too much like life forms; Star Trek has a very good reason for having that consistency." (Star Trek: The Magazine Volume 1, Issue 10, p. 71)

That reluctance was put aside later, as the model, slightly modified at Eden FX, made additional appearances as the Romulan drone ship in several episodes of Star Trek: Enterprise Season 4. The model was affectionately dubbed "The Flea" by the production team. [7](X)

This CGI model was originally created for use in Star Trek: Voyager.

On the origin of the Hierarchy Assault-class Rick Sternbach commented, "I vaguely recall the script saying it was an "alien ship bristling with antennae," since the crew was engaged in massive surveillance operations of everything around them. The two sketches I turned in were pretty different from most other things we'd seen before, maybe the first one more than the second one. Where the design went after that was (...) between Brandon and our VFX guru Dan Curry." [8](X) Starting from some of the details of the two sketches Dan Curry (who remarked, "Brandon carried it further when he made his excellent CG version. He really understood the aesthetic I was after...", [9](X)) and Brandon MacDougall refined the design further at Foundation Imaging into the final design as it finally appeared in VOY: "Tinker Tenor Doctor Spy" and VOY: "The Void" as a CGI model rendered in Lightwave.

For the seventh season appearance of the Hierarchy in "Renaissance Man", MacDougall altered the forward hull of the ship by cutting down the number and changing the shape of the portholes and elongating the forward hull for the ship to become the Hierarchy survey vessel. [10](X) The aft section remained largely unchanged. Out of courtesy, MacDougall re-rendered the original configuration for Doug Drexler's blog.

Sternbach's design sketches turned up at Propworx' "The official STAR TREK prop and costume auction" of 8 August 2010 as Lot 408, where they sold for US$180 (including buyers premium), having been estimated at US$100-$200.

This CGI model was designed by Rick Sternbach and created as the Mutara Interdimensional Deep Space Array System in VOY: "Pathfinder". It was later reused as the Yosemite 3 research station in ENT: "Zero Hour".

Retrieved from "https://memory-alpha.fandom.com/wiki/VOY_studio_models?oldid=2379773"
Community content is available under CC-BY-NC unless otherwise noted.