These three Cardassian officers accompanied Gul Evek and landed on Dorvan V to remove Native American colonists from the planet which although settled by them had been ceded to Cardassia in a treaty with the Federation. In the beginning confrontation, one of them knocked his guard out and was hit by a disruptor shot. The confrontation was ended quickly after Gul Evek ordered his ship to beam the ground team back aboard. (TNG: "Journey's End") 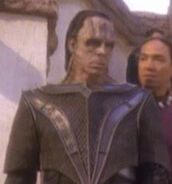 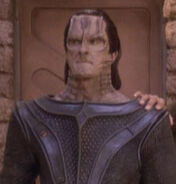 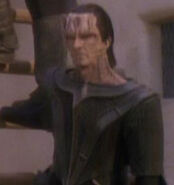 This female officer served on the Galor-class warship Vetar in the year 2370. When her ship was attacked by Maquis vessels, she was wounded and treated in sickbay aboard the USS Enterprise-D. (TNG: "Preemptive Strike")

This Cardassian was played by regular background actress Cameron who received no credit for this appearance.
Apart from Gul Ocett, she was the only other female Cardassian officer ever seen.

These two officers served on the Vetar in 2370. Along with another officer, they were treated by Ensign Martinez and a nurse in sickbay aboard the Enterprise-D after they were wounded during the Maquis attack. (TNG: "Preemptive Strike") 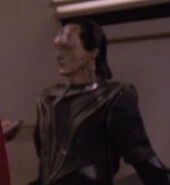 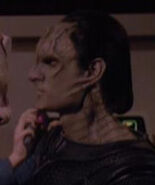 Played by an unknown actor
Add an image to this gallery
Retrieved from "https://memory-alpha.fandom.com/wiki/Vetar_personnel?oldid=2077374"
Community content is available under CC-BY-NC unless otherwise noted.