Victor Bevine (born 23 April 1954; age 66) is an actor who appeared in three Star Trek spin-off series and in the feature film Star Trek: First Contact. In addition he voiced a Romulan guard in the 1999 video game Star Trek: Hidden Evil.

Bevine has started his acting career in the '70s and has appeared in films such as the drama A Separate Place (1972), the television film Women at West Point (1979, with Leslie Ackerman and Jack Blessing), The Princess and the Call Girl (1984), the action film Dark Avenger (1990, with Gregg Henry, Jennifer Savidge, Ken Jenkins, and Tony Amendola), the short comedy Hardcore Action News (2002), the short drama Starcrossed (2005), and the thriller Rogue 379 (2007).

Bevine has also appeared in several television series and played recurring roles as Hank Judson in Santa Barbara (1985, alongside Nicholas Coster and Louise Sorel), as Mr. Ogins in Days of Our Lives (1992), as Mr. Dipretto in the Chicago Hope episodes Women on the Verge and Life Lines (both 1996 and alongside Gregg Henry in the previous one), as Juror Miles Bewkus in Murder One (1995-1996, with several Star Trek performers such as Daniel Benzali, Barbara Bosson, John Fleck, Rosalind Allen, Jack Kehler, Adam Scott, and Deborah May), as Officer Sanders in Homicide: Life on the Street (1998, with Michelle Forbes), and as voice of Sebastian in Dark Angel (2001, with John Savage and Nana Visitor).

He has also appeared in guest roles in television series such as CHiPs (1982, episode K-9-1, with Robert Pine and Michael Dorn), Moonlighting (1989, episode In 'N Outlaws, with Susan French), Models Inc. (1994, episode Be My, Be My Baby, with Robert Beltran and Margot Rose), Murder She Wrote (1995, episode Quaking in Aspen, with Deborah Lacey and Leigh Taylor-Young), JAG (1998, episode Clipped Wings), Birds of Prey (2002, episode Three Birds and a Baby, with regulars Dina Meyer and Ian Abercrombie, and Michael Welch), and CSI: Crime Scene Investigation (2002, episode The Execution of Catherine Willows, with Wade Williams and Wayne Pere, and 2004 episode What's Eating Gilbert Grissom?, with Mark Lentry, Dan Warner, and Wallace Langham). Both episodes featured David Lee Smith.

Bevine has also worked as director, writer, and producer and has released films such as the drama Desert Cross (1994) and the documentary Starfish (2005). 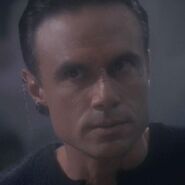 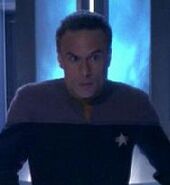 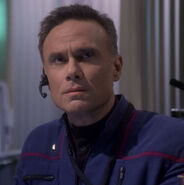 Retrieved from "https://memory-alpha.fandom.com/wiki/Victor_Bevine?oldid=2416956"
Community content is available under CC-BY-NC unless otherwise noted.