Klingon crewman
Fencing opponent
Victor Paul (15 January 1927 – 13 September 2011; age 84) was a stuntman and stunt coordinator who worked as stunt double for Dan Kern, performing his fencing stunts, in the Star Trek: The Next Generation first season episode "We'll Always Have Paris". Twenty years prior, he appeared as a Klingon crewman in the Star Trek: The Original Series third season episode "Day of the Dove". [1] Paul also portrayed Picard's fencing opponent in a deleted scene of TNG second season episode "The Measure Of A Man". This appearance is part of the extended version of the episode on TNG Season 2 Blu-ray.

Born as Philip Paul Romano, Paul was the father of stuntmen John Phillip and Philip Romano and is probably best known for his work on the 1960s television series Batman. He worked as stunt coordinator on 120 episodes between 1966 and 1968 and was also the stunt double for actor Burt Ward who portrayed Robin along with Batman's stunt double and "Day of the Dove" co-performer Hubie Kerns, Sr., father of another Trek stuntman Hubie Kerns, Jr. He also doubled for Ward in the 1966 television movie Batman which also featured Trek stunt performers Dick Crockett, Lou Elias, Gil Perkins, Charlie Picerni, and George Sawaya and was interviewed for the 2002 documentary Behind the Action: Stuntmen in the Movies together with Robert Herron and Tony Brubaker. [2] [3] Specialized in performing sword fights and fencing stunts he can be seen various times in movies and television series doubling actors in these scenes. He also worked as fencing coach / sword fight coach in numerous projects such as the television drama My Wicked, Wicked Ways… The Legend of Errol Flynn (1985, with Denise Crosby), the comedy The Whoopee Boys (1986), the fantasy comedy Stay Tuned (1992, with Gary Combs), and the comedy Robin Hood: Men in Tights (1993, with Patrick Stewart and stunts by Dan Barringer, Erik Cord, Clint Lilley, Scott Leva, and David LeBell). Paul was a Lifetime member of the Stuntmen's Association of Motion Pictures.

Paul started his work in the film and stunt business in the late 1940s with featured appearances in the drama Scene of the Crime (1949), the war drama Battleground (1949, with Ricardo Montalban), the crime drama Gambling House (1950), the romance Mask of the Avenger (1951), and the adventure Blackbeard, the Pirate (1952). Prior to his work on Batman, Paul also worked on the adventure Around the World in Eighty Days (1956, with stunts by Paul Baxley, Max Kleven, Chuck Hicks, and Gil Perkins) and on the adventure The Buccaneer (1958, with Chuck Couch and Gil Perkins). 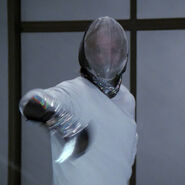 Fencing opponent
TNG-R: "The Measure Of A Man"
(uncredited)