View-Master (or ViewMaster) is a three-dimensional stereoscopic viewing device that utilizes specially produced image reels which, when inserted into and viewed through the viewer, create stereoscopic or 3-D images. Typically, modern reel packets contain three reels each, with a total of 21 pairs of images altogether. Since its creation in 1939, the View-Master has been produced in many forms and by several companies. Currently, Fisher-Price (a subsidiary of Mattel) has rights to make the device.

Over the years, five licensed Star Trek-themed projects have been made for the standard View-Master viewer. The first, adapting the episode TOS: "The Omega Glory", was shot on set with a stereo camera while the episode was being filmed, whereas the second, Mr. Spock's Time Trek (adapting TAS: "Yesteryear"), consists of drawn art based on the Filmation animated episode.

The two movie-based sets (based on Star Trek: The Motion Picture and Star Trek II: The Wrath of Khan) feature 2-D publicity photos processed into "layered" 3-D images. The final set's images (adapting TNG: "A Matter Of Honor") appear to simulate 3-D via computer manipulation of the paired images.

The first three sets were released in the original square paper envelopes (complete with story booklets or a trivia booklet), while the latter two saw release exclusively on "blister cards" (long cardboard cards with the reels held on in plastic "blister" bubbles) and with two different release numbers. 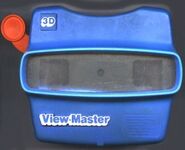 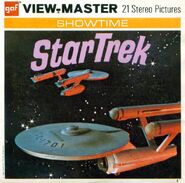 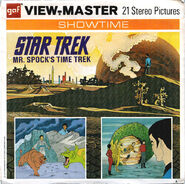 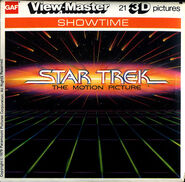 The TAS: "Yesteryear" set was also released in a version usable with the "Talking View-Master" viewer available at the time (Reel Set AVB555).

The TOS: "The Omega Glory" and TAS: "Yesteryear" sets were available in the Spacemen Theatre In The Round cylindrical cardboard tub, which also included "Flash Gordon" and "Buck Rogers" reels, a 2-D projector and a 3-D viewer.

The Star Trek: The Motion Picture set was alternatively available in a Gift Pak & Poster cylindrical cardboard tub, complete with a 3-D viewer, a double-sided movie poster and customized cardboard 3-D glasses (to view the 3-D side of the poster).

30 drawn and colored 2-D animation-style images, based on publicity stills from Star Trek: The Motion Picture, were available on a small cartridge (Set 3158) made for the View-Master Show Beam push-button projector, which resembled a long plastic torch.