Viewers or monitors were the optical and visual devices and screens used aboard starships, such as viewscreens and scopes. "Viewer" was a general term for equipment found among numerous races. Viewers came in a variety of sizes, from desktop units to wall-mounted versions such as those commonly found on the main bridge of a starship. Some viewers were equipped to generate three-dimensional images. (TOS: "Where No Man Has Gone Before")

Viewers were also found in bars and restaurants such as in the Café des Artistes in Paris on Earth. (TNG: "We'll Always Have Paris")

NX-class starships also featured viewers in the ship's galley and in the pantry. (ENT: "The Catwalk")

A viewer in Captain Pike's quarters in 2254 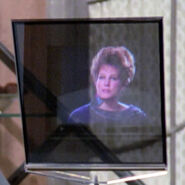 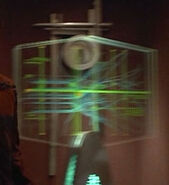 A monitor aboard a Krenim weapon ship in 2374
Add an image to this gallery
Retrieved from "https://memory-alpha.fandom.com/wiki/Viewer?oldid=2504287"
Community content is available under CC-BY-NC unless otherwise noted.