Susan Oliver (2254)
Melissa George (2257)
"There's something I need to say. When you came to Talos, I'd been alone for so many years. I never imagined happiness or love. And when the Talosians decided we were… unsuited for each other… when you left, it was worse. Because I knew what I'd lost."
– Vina to Christopher Pike, 2257 ("If Memory Serves")

Vina was a female Human civilian in the 23rd century. (TOS: "The Cage")

Vina was listed as a crewman on the SS Columbia in 2236. Her ship was carrying scientists from the American Continent Institute on an expedition to the Talos star group. The same year, she was the sole survivor when the survey ship crashed on Talos IV. In the aftermath, she was brought back to health by the Talosians.

Vina piqued the Talosians' interest in the Human species, and this prompted them to lure the USS Enterprise to the planet in 2254, hoping to find a mate for her. They selected Captain Christopher Pike, and through a series of illusions, attempted to induce him to remain on the planet and begin a family with her, in an attempt to learn about Human sexuality and companionship.

When the Enterprise crew demonstrated that they would prefer death to life in captivity, the Talosians declared Humans unsuitable for their plans to reclaim the surface of the planet. After the crewmembers beamed up, Vina expressed that she wanted to remain with the Talosians, who then allowed Captain Pike to see that her youthful beauty was an illusion. She explained she had nearly died in the crash and that the Talosians, who had never seen Humans, had had no guide in repairing her smashed body. Hunchbacked, severely scarred, but in good physiological health, she preferred to retain her illusion of beauty on Talos IV rather than live among Humans and die away from the planet. Back aboard the Enterprise, Pike told the crew nothing of what he had just seen, saying only that Vina was remaining with the Talosians and that he agreed with her reasons. (TOS: "The Cage")

Reunion with Spock and Pike

Three years later in 2257, Vina greeted Spock and Michael Burnham after their shuttle landed on the planet. She was able to provide them with a set of transporter coordinates to enter into the computer to beam to the caverns below. There, she assisted the Talosians with restoring Spock's mind, and acted as a liaison between the two and the Talosians. Later, she appeared to Captain Pike aboard the USS Discovery to allow him to communicate with Spock and Burnham below the surface. She followed the two to the surface as Discovery approached the planet, and as Pike and Section 31 operatives were attempting to retrieve the two from the surface with a transporter, she appeared to Pike one final time, and convinced him to break off the attempt, which was a ruse to trick Section 31 into thinking they captured Spock and Burnham. (DIS: "If Memory Serves")

Footage of her encounter with Pike and the crew of the Enterprise during the original visit to Talos IV, from 13 years prior, was transmitted from that planet during Spock's fictional court martial aboard the same ship in 2267. Upon the Enterprise's return to Talos IV, it was determined that she was still alive, a fact that had prompted Spock's return of the crippled Pike. The Talosians utilized the same illusion techniques they used on Vina to restore Pike's own youth and mobility, and he and Vina were last seen beginning a new life on Talos IV. (TOS: "The Menagerie, Part I", "The Menagerie, Part II")

As a result of the Talosians' mind tricks, Vina appeared in several forms during Pike's illusions. 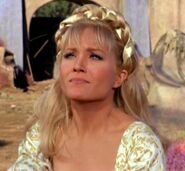 Vina as a damsel in distress 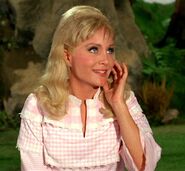 Vina as an Orion slave girl

"You appear to be healthy and intelligent, captain. Prime specimen."

"But they found it's a trap. Like a narcotic. Because when dreams become more important than reality, you give up travel, building, creating."

- Vina to Christopher Pike on why the Talosians developed their mental powers (TOS: "The Cage")

I'm a woman as real and as Human as you are. We're like Adam and Eve."

- Vina, convincing Pike that she is not an illusion (TOS: "The Cage")

- Vina, about to be punished for revealing the truth that she and Pike are meant to breed (and finally proving that she's for real) (TOS: "The Cage")

"A person's strongest dreams are about what he can't do."

- Vina, before becoming an Orion woman (TOS: "The Cage")

"Vina? H-How...?"
"I'm not used to you being afraid of me."
"Used to me?"
"It's a lot to digest. There's something I need to say. When you came to Talos, I'd been alone for so many years. I never imagined happiness or love. And when the Talosians decided we were...unsuited for each other...when you left, it was worse. Because I knew what I'd lost."

-Christopher Pike and Vina after Vina appears to him. (DIS: "If Memory Serves")

"I thought about you--us-- often, and wished that you would have come with me."
"Chris, I didn't need to. That's what I'm trying to say. They brought you back to me. Not the real you-- it's illusionary, of course-- but the part of you that still lives inside of me. We spent a lifetime together."
"I'm glad...I'm glad you're not alone."
"All this time, you kept me sane. Kept me tethered to what I once felt. Even though I was never the person you thought I was."
"You didn't deceive anyone, Vina. I felt it, too. But you're here now. This is real."
"As real as it needs to be."

- Vina appearing to Christopher Pike on the bridge of the Discovery (DIS: "If Memory Serves")

Vina was played by actress Susan Oliver in "The Cage" and by actress Melissa George in "If Memory Serves". Archive footage of Oliver's apperance was featured in "The Menagerie, Part I", "The Menagerie, Part II" and the teaser of "If Memory Serves". George has confirmed in interviews that she overdubbed some of Oliver's original dialogue in the teaser.

In the first draft story outline of "The Cage", Vina was initially described as "provocatively lovely, showing [...] few effects of the ordeal". In the scripts of "The Cage", Vina was at first characterized thus; "Although her hair is uncombed and awry, her make-shift dress tattered, she is still a remarkably beautiful young woman. Supple, tanned, barefooted, she looks more like a woodland nymph than the survivor of a harrowing ordeal." The scripts went on to describe her as having "a graceful young animal quality", which was highly seductive, and a "spectacular figure". In an ultimately unused line of dialogue from the scripts, Pike (named "April" in the first draft and "Winter" in the final draft) likened Vina, in this form, to a "little animal", considering how wild she seemed.

In regard to when she appears in the simulation of Rigel VII (which was named Rigel 113 in the episode's scripts), the installment's first draft script described Vina thus: "She wears a gown suggesting a medieval era, but torn and stained as if she has been for some time fleeing and hunted." In the same scripted scene, the frightened Vina's pleas for Pike (named, at that stage, Robert April) to save her from a Kalar were initially spoken in Rigelian, until the captain persuaded her to speak in English again, as she had when they first met. In the episode's final draft script, Vina was instead scripted to be wearing "a feudal-level dress, [her] hair braided and long". Not only was she no longer referred to as wearing a "torn and stained" garment, but she also spoke English throughout that draft of the script.

Initially, Susan Oliver was not of a mind to accept the role of Vina, as the actress, exhausted from a previous filming assignment, was looking forward to a holiday in Hawaii. However, Gene Roddenberry adamantly wanted her for the part of Vina, and to this end, he asked Studio Executive Oscar Katz to put pressure on her. "Although I'm usually not that charming with women, I talked her into taking the part," said Katz. "Part of the appeal was that it was going to be very easy. She could knock it off 'just like that'," he added, snapping his fingers. Yet, Oliver's part was anything but a snap of the fingers, due to the elaborate makeup sessions she had to undergo in order to show Vina's various manifestations. (Star Trek Creator: The Authorized Biography of Gene Roddenberry) "The Cage" Director Robert Butler stated, "I remember Susan's transformation was certainly laid out and discussed and worked out ahead of time, and then it was very time-consuming to do, of course." (The Star Trek Interview Book, p. 100)

Oliver was aware she had to play several incarnations of Vina, including that of the Orion slave girl. "One of the unique things about this job was I wasn't really a dancer," Oliver recalled. "They had a choreographer work with me a solid week, every day, before I began filming. There were different facets in this role, and the green girl was most challenging." A bit to her surprise, it was not her lack of dancing skills that gained attention, but rather her appearance, when she, for the first time, appeared on set in her Orion slave girl attire. "The usual 'hi, Suse' banter was gone; the guys stood back and stared or averted their eyes as though it were immoral to look at such a woman. There seemed almost a sense of their whispering, 'Wow, Susan's not such a nice girl after all, she's maybe wild, evil.' Even before the dance began and I was just standing demurely to the side, this feeling was in the air. Gene has touched on something dark in man's subconscious; one could imagine doing things with a green mate that he would never dare with someone his own color." (Starlog, issue 135, p. 78)

Still, despite experiencing some challenges with the part, Oliver reveled in portraying Vina. "The show was a very special experience and it was fun to do the wild dance; It also meant hard work. Believe me, it was not easy to be green," she concluded. (Starlog, issue 135, p. 78)

Vina's mirror universe counterpart counterpart (β) was mentioned but did not appear in the short story "The Greater Good" contained in the anthology Shards and Shadows. Very similar to in the prime universe, the Talosians had used a distress call to lure the ISS Enterprise to the planet with the intention of having its captain, Christopher Pike, mate with Vina, so as to create a race of Terran slaves. However, Vina was rejected by Pike, as he refused to mate with an "insipid Human female."