A visual recording device or video camera was any device that could capture light in a way so that a scene that was captured could be recreated at a later time. First becoming popular on Earth during the 20th century, the technology was used well into the 24th century.

Devices seemingly identical in design and purpose were also known to exist on planets other than Earth. In 2268, similar devices were seen on 892-IV, (TOS: "Bread and Circuses") and film motion picture cameras existed on Ekos. (TOS: "Patterns of Force")

When the USS Voyager was thrown back in time and space to 1996 Earth, a man caught Voyager in low orbit with his camcorder during a barbecue. (VOY: "Future's End")

In 2266, Montgomery Scott installed what appeared to be a video camera aboard the USS Enterprise to record the wedding of Angela Martine and Robert Tomlinson. (TOS: "Balance of Terror")

In 2293, a journalist covering the maiden voyage of the USS Enterprise-B wore a head-mounted video camera fit with an electric light. (Star Trek Generations)

Lieutenant junior grade Anthony Brevelle wore a head-mounted visual recording device during an investigation of missing Starfleet personnel on Tarchannen III. The image data collected was later used to discover an invisible species of alien. This device could be programmed to include data in the recording, like the stardate or the time of recording. It also included a light source that could be switched on if the surroundings were too dark. (TNG: "Identity Crisis") 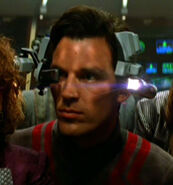 Journalist with head-mounted video camera in 2293 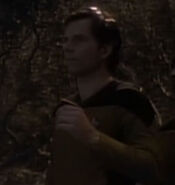 A head-mounted visual recording device, 2360s
Add an image to this gallery

Retrieved from "https://memory-alpha.fandom.com/wiki/Visual_recording_device?oldid=2426927"
Community content is available under CC-BY-NC unless otherwise noted.