Vorok's battle cruiser was a type of 22nd century Klingon battle cruiser that was in service during the early 2150s, under the command of Klingon Captain Vorok. The vessel was armed with forward and aft torpedo launchers, as well as an aft tractor beam. 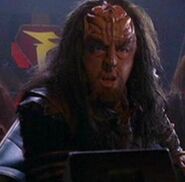 In the script for "Unexpected", this Klingon vessel was described as "massive, battle-scarred, menacing." An ultimately unused but scripted line of dialogue had Vorok say that the craft and its crew had been away from Qo'noS for "a long time."

The bridge of Vorok's battle cruiser was represented with a set on Paramount Stage 8. (Information from call sheets)

This battle cruiser was a very much "unexpected" reuse of the K't'inga-class CGI model, used at the behest of the producers, despite the series being set over a hundred years before this Klingon ship class made its first appearance. A new CGI model was created to represent this ship, but the design was ultimately rejected. [1]