This short about Kathryn Janeway actress Kate Mulgrew gives an insight into her time on Star Trek: Voyager. In the three chapters "The Beginning", "The Audtion", and "What If Kate [Hepburn] & Kathryn Met?", Mulgrew talks about her experiences and memories during the seven year run.

Mulgrew tells that she never watched Star Trek and was among the original actresses who auditioned for the part of Nicole Janeway. When Geneviève Bujold left the production, Mulgrew was among five other actresses who were brought back to read again for the part. Rick Kolbe told her while filming "Caretaker", that "The bridge is your living room. So treat it accordingly, you're the boss." It took two seasons before everyone told her that she could handle her own character. And from the episode "Death Wish" on, Mulgrew was involved in the creative writing process for her character.

Also included in this special feature are clips from the episodes "Caretaker", "Prime Factors", and "Death Wish". Several production stills were also part, including stills from "Caretaker", "The Chute", "Macrocosm", and "Bride of Chaotica!". A short behind the scenes conversation with Ethan Phillips and Rick Kolbe while filming re-shoot scenes for "Caretaker" at location at the Los Angeles Convention Center can be seen as well.

Mulgrew and Rick Kolbe during filming for "Caretaker" 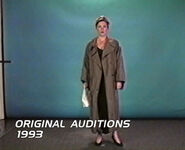 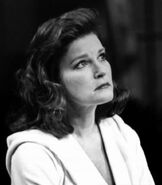 Mulgrew as Katherine Hepburn in "Tea at Five"

Cosmo Genovese on set for "Caretaker"

The cast of season 5
Community content is available under CC-BY-NC unless otherwise noted.