The Vulcan language was the language spoken by the Vulcans of the planet Vulcan.

Vulcan names as spoken and written among non-Vulcans were, at best, only approximations of actual Vulcan names. Correct pronunciations using non-Vulcan phonemes, and accurate type-setting —using, for instance, the Roman alphabetical nucleus of the English language—had a tendency to prove non-native efforts to reproduce Vulcan family names highly inadequate. (TOS: "This Side of Paradise", "Journey to Babel")

The Vulcan written language had several different forms, some of which combined with each other.

The primary version resembled terrestrial musical notes and was written in vertical columns running top-to-bottom, left-to-right. The primary Vulcan script consisted of a central staff, along which spirals, long and short dashes, and dots were written. (ENT: "The Seventh")

In 2375, the Logicians, a baseball team founded by Captain Solok of the USS T'Kumbra, wore uniforms with their names on the back in Vulcan script. (DS9: "Take Me Out to the Holosuite")

A more intricate version of the musical-notation-like text was used in ancient times by the Vulcans. This type was written in the Kir'Shara, as well as engraved on the walls of the monastery at P'Jem. Several stones which were later used to depict a map of the catacombs beneath the monastery also had Vulcan symbols engraved. Two of the three stones used by Trip Tucker to display a set of three light sources featured the IDIC symbol. (ENT: "The Andorian Incident", "Kir'Shara")

The stones featuring the Vulcan symbols were later sold off on the It's A Wrap! sale and auction on eBay. [1]
The call sheet's props section just mentioned a "map using stones in a bowl" for this scene.

A more stylized version of this script appeared on the Promenade of Deep Space 9. (DS9 set decoration)

A second writing system consisted of simple squiggles, spirals, and dots, and could be used separately or in tandem with the primary script. A sequence of several symbols from this script appeared on many forms of Vulcan clothing. This script was also written vertically. (Star Trek: The Motion Picture; Star Trek IV: The Voyage Home; ENT: "Breaking the Ice", "Fusion", "Stigma", "Awakening", et al.)

In the final draft script of "Breaking the Ice", a letter written in this Vulcan writing style was simply described as being "in Vulcan," rather than the contents of the message – in either English or Vulcan – being notated in the script.

A third cuneiform-like script appeared on Vulcan starship hulls and in some Vulcan homes and temples. This script appeared to run left-to-right, like many Terran languages. (Star Trek: The Motion Picture; TNG: "Unification II")

In 2370, Jean-Luc Picard identified an artifact recovered from Calder II as being from Vulcan, because the alphabet and symbology of the glyphs and pictograms on the artifact was much more consistent with early Vulcan than the Romulan language. (TNG: "Gambit, Part II")

The Vulcan language was related to the Romulan language. In the alternate reality caused by Nero's incursion, Lieutenant Hawkins, the communications officer of the USS Enterprise was unable to distinguish Vulcan from Romulan. However, Nyota Uhura, who was fluent in all three Romulan dialects, could easily distinguish the two languages. (Star Trek)

In a dream, Malcolm Reed imagined that T'Pol displayed romantic interest in him, suggesting his name resembled "mol-kom", a Vulcan word for "serenity." (ENT: "Shuttlepod One")

In the script pronunciation guide for "Shuttlepod One", this word was phonetically notated as "MOLL-come".
As the term was only used in Reed's dream, this may not have been an actual word in Vulcan.

A young Michael Burnham asked Sarek to teach her Vulcan so she could perform better in her schooling at the Vulcan Learning Center. Sarek reminded her that it was not her Human tongue that was the problem, but her Human heart. (DIS: "The Vulcan Hello")

When the USS Enterprise encountered a Melkotian buoy in 2268, it spoke to the crew in their native languages, which included the Vulcan language, as heard by Spock. (TOS: "Spectre of the Gun")

Nahp – hif-bi tu throks
Your thoughts... give them to me

The scene which contained this Vulcan dialogue was filmed in English and later translated into Vulcan by actor James Doohan. Doohan observed the actors' lip movements and created new vocal "sounds" for them to dub over their original English.

Dom – ki'sarlah
So, it has come

Dungi tu sahrafel?
Will you trust me? (Star Trek III: The Search for Spock)

Qual se tu?
Spoken by Spock upon seeing Sybok on the surface of the planet Nimbus III (Star Trek V: The Final Frontier)

Chaya t'not
Expression of gratitude; equivalent to English "Thank you".

This is not translated on screen, but inferred from Hoshi's reply, "You're welcome".

This was not translated on-screen, but Mike Sussman provided the translation from his production notes.

This statement is not translated on screen; the translation comes from the episode's final draft script.

Tiar merra.
T'Pol repeated this while trapped in the decontamination chamber during her artificially triggered pon farr. (ENT: "Bounty")

This was not translated on-screen, but Mike Sussman suggested it may have been intended to be an offensive comment. (citation needed • edit)

The Vulcan dialogue used in Star Trek II: The Wrath of Khan, Star Trek III: The Search for Spock and the ENT episode "Home" was translated by linguist Marc Okrand. (citation needed • edit)

Tulek tu.
You are the vessel.

This statement is not translated on screen; the translation comes from the episode's final draft script.

In the script of "Awakening", this statement was only notated phonetically and was the only entry in an addendum to the script.

This is not translated on screen, but inferred from Burnham's reply, "I love you, too, brother."

The Vulcan language was originally to have been used in TOS: "Court Martial" (then titled "Court Martial at Star Base 811"). In the first draft story outline of that episode, Spock, while testing a suspicious computer system that had been acting as prosecutor at James T. Kirk's court martial, asked the computer a string of questions in what the document called "his native tongue." However, the language was incomprehensible to everyone else in the courtroom except the computer.

The roots of the Vulcan language can also be traced back to a memo that Gene Roddenberry sent to Star Trek: The Motion Picture's director, Robert Wise, on 19 April 1979. Roddenberry pointed out there were "many arguments" for the creation of such a language and suggested that, as the film also included Klingon language, "it may feel something like a 'cheat' to do the Vulcan scene in King James-type English." He additionally admitted that inventing a Vulcan language would take considerable work, before discussing how the language could be dubbed into the film, as required. (The Making of Star Trek: The Motion Picture, p. 198)

For the development of the Vulcan language, Roddenberry actually turned to a University of California, Los Angeles, linguistics professor, Hartmut Scharfe. Then Associate Producer Jon Povill elaborated, "The Vulcan masters were actually shot and recorded speaking English. Eventually, we decided we didn't like the way it sounded and we didn't like the way it played in English. It was Gene's idea to try and find other words that would synch up to the English mouthing which would not sound anything at all like English, and that's how the Vulcan Language came about. We got this professor from the linguistics department at UCLA, Hartmut Scharfe, and he constructed a Vulcan language for us very well. In fact, I think Hartmut is, in voiceover, one of the Vulcans." Scharfe incidentally, also constructed on that occasion the Klingon language, but unlike his Vulcan, that was edited by Povill and James Doohan because "his Klingonese didn't sound alien enough." (Return to Tomorrow - The Filming of Star Trek: The Motion Picture, pp. 260-261)

The writings at the monastery wall in "The Andorian Incident" 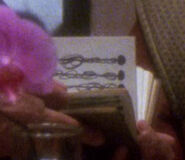 The writings in the book seen in "Unification II"

The engraved wall tiles in the meditation room of the monastery at P'Jem in the episode "The Andorian Incident" are cursive versions of the Vulcan writings seen on Spock's robe in the early Star Trek films. These graphics were evocative in creating the writing system based on musical scales. The script style of this writing was first seen in Spock's book of Vulcan teachings in the Star Trek: The Next Generation fifth season episode "Unification II". It was also the basis of the writings on the jewelry worn by the Vulcan captain seen in Star Trek: First Contact. Furthermore, the writing seen in "The Andorian Incident" on the reliquary archway is based on the Vulcan symbols seen on Spock's robe in Star Trek II: The Wrath of Khan. ("The Andorian Incident", text commentary, ENT Season 1 DVD special feature)

In the It's A Wrap! sale and auction, several Vulcan costume descriptions refer to Rata ("concept"), Tafar ("discipline"), and Tapan ("process") as background names for a trinity of symbols or letters that appeared together often on Vulcan robes, starting with Sarek in Star Trek III: The Search for Spock. [2][3][4][5]

B'elak paar, heard in the episode VOY: "Gravity", was defined as the Vulcan term for self-pity by the Star Trek Encyclopedia (4th ed., vol. 1, p. 56).

The writers' second draft script of ENT: "Breaking the Ice" included a conversation about the Vulcan language, in preparation for Enterprise NX-01 hailing the Vulcan ship Ti'Mur. First, Hoshi Sato asked if the communication should be sent in Vulcan. Though T'Pol encouraged her to send it in English instead, Captain Jonathan Archer decided that the transmission should indeed be run through Enterprise's universal translator, to avoid the risk of insulting anyone by making assumptions.

A Vulcan expression of congratulations which was included in the first draft script of ENT: "Shadows of P'Jem" but not in the final draft of that script (nor in the episode itself) was "pontal na'sochya".

The Vulcan language has also appeared in numerous non-canon works over the years, such as the following dialogue from Spock's World:

TOS fan folklore included the word pastak, supposedly the Vulcan word for peace. Fans wished one another pastaklan vesla, "peaceful thoughts". There was also a fanzine by this name.

The most extensive and influential Vulcan language developed by fans in the 1960s was that of linguist Dorothy Jones Heydt. It included roots, grammatical rules and syntax, and was used in her own stories and articles, then picked up by a number of other fan authors. The expression ni var, meaning "two forms" and originally referring to an art form in which two elements or aspects of a single subject are contrasted, was used as the title of a fan novella by Claire Gabriel which subsequently appeared (in substantially edited form) in the anthology Star Trek: The New Voyages. The story enjoyed immense popularity among fans as well as with Leonard Nimoy himself. The Vulcan ship Ni'Var, which appeared in an episode of Enterprise, was named after the story; the original association with Heydt's seminal conlang had been forgotten.