View source
Multiple realities
(covers information from several alternate timelines)
This article or section is incomplete This page is marked as lacking essential detail, and needs attention. Information regarding expansion requirements may be found on the article's talk page. Feel free to edit this page to assist with this expansion.
For the unfortunate injury, please see pinched nerve.

The Vulcan neck pinch, colloquially referred to as a Vulcan nerve pinch, was a martial technique developed by Vulcans. It involved applying pressure near the base of the neck, at the shoulder, and nearly instantly rendered the target unconscious, often so fast that the target was unable to cry out, though not always. Being able to perform the nerve pinch was seen as a mark of true Vulcanhood by some. (TOS: "Day of the Dove"; TAS: "Yesteryear")

In at least some cases, the results resembled an extreme trauma to the trapezius nerve bundle, as if the neuro-fibers had been ruptured. (VOY: "Cathexis")

The technique did not appear to cause permanent injury.

The pinch was effective on most humanoid species, and even some animals. The only Human to have ever been insensitive to it was Gary Seven. (TOS: "Assignment: Earth") When used on Human Augments such as Khan Noonien Singh, it caused pain, but was not enough to subdue them. (Star Trek Into Darkness) It was proven to be ineffective on robotic androids when Spock took the time to softly try it on Alice, who simply asked him calmly if that gesture had any significance. Vians were also unaffected by the nerve pinch. (TOS: "I, Mudd", "The Empath")

In 1986, when the senior staff of the former USS Enterprise went back in time to acquire a pair of humpback whales, Captain Spock used the nerve pinch on an obnoxious punk playing his music loudly on a boom box while riding a bus, prompting an enthusiastic response from the other passengers. (Star Trek IV: The Voyage Home)

In August of 2152, T'Pol was forced to nerve pinch Dr. Phlox, a Denobulan under the effect of dangerous mind-affecting radiation from a trinary star system. She was unsure at the time if it would work on his species, but it was effective and he thanked her after the crisis, as he was about to perform a cerebral micro-section to determine the cause of a minor headache. (ENT: "Singularity")

Spock once performed the Vulcan nerve pinch on a horse, while his alias "Selek" subdued a Le-matya in the same manner, prompting a young Spock to ask if he thought he'd ever do it as well as Selek did, which the older Vulcan affirmed. Tuvok once pinched a member of Species 8472 that had disguised itself as a Human. (Star Trek V: The Final Frontier; TAS: "Yesteryear"; VOY: "In the Flesh")

Spock once used a two-handed variety of the technique to subdue two opponents: an Andorian and a Tellarite. (TOS: "Whom Gods Destroy")

In 2370, Sakonna used the Vulcan nerve pinch on a Starfleet security guard who was guarding Gul Dukat on Deep Space 9. (DS9: "The Maquis, Part I")

In the alternate reality, when James T. Kirk mutinied against acting captain Spock aboard the USS Enterprise, Spock used the nerve pinch to subdue him. (Star Trek)

On some occasions, non-Vulcans have been instructed in the technique. Spock attempted in vain to teach James T. Kirk. On the planet Omega IV, while fighting Cloud William and Sirah in his cell, Kirk expressed his appreciation for Spock's neutralization of Sirah using the pinch. (TOS: "The Omega Glory")

Overall, the nerve pinch seemed to be extremely difficult to learn for non-Vulcans, although the android Lieutenant Commander Data was able to master it, as was Captain Jean-Luc Picard, years after the latter's mind meld with Sarek. (TNG: "Unification II", "Starship Mine"; Star Trek Nemesis)

Having studied for many years on Vulcan, Michael Burnham was able to perform the nerve pinch, using it to render Captain Philippa Georgiou unconscious in the course of her attempted mutiny in 2256. (DIS: "The Vulcan Hello")

Captain Jonathan Archer was also able to perform the nerve pinch while carrying the katra of Surak. (ENT: "Kir'Shara")

Dr. Leonard McCoy, however, was unsuccessful in performing the technique on a security officer while carrying Spock's katra. (Star Trek III: The Search for Spock)

Constable Odo used the nerve pinch to incapacitate Asoth (though not render him unconscious) to stop him from force-feeding Quark some bad Kohlanese stew, and was observed dispatching a Starfleet security guard using the technique in 2372. (DS9: "Babel", "Paradise Lost")

The former Borg drone Seven of Nine also displayed the ability to perform it, as shown during a fight with Lieutenant Commander Tuvok in 2374. (VOY: "The Raven") 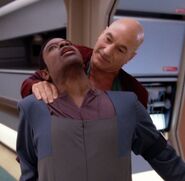 Odo using the Vulcan nerve pinch on a security officer

Seven of Nine executes a Vulcan nerve pinch on Tuvok.

In 2237, after "Selek" taught young Spock how to execute the pinch, the boy planned to demonstrate his newfound prowess to his schoolmates, who had previously taunted him for not being able to master the maneuver yet. He described his plans to Sarek as having "business to conduct" with them. (TAS: "Yesteryear")

The nerve pinch was devised for the episode "The Enemy Within", in which it is performed on a duplicate of Kirk. (The Star Trek Compendium, 4th ed., p. 34) In the final draft and revised final draft of the episode's teleplay, the moment of the nerve pinch's first on-screen appearance was described by saying that Spock "kayoed" Kirk's double, and a later line of ultimately unused dialogue had McCoy refer to the double as having received a "rap on the head."

The Vulcan nerve pinch was thought up by Leonard Nimoy, who felt that Spock was too dignified to render someone unconscious by striking them over the head. (Star Trek Encyclopedia (3rd ed., p. 550)) When Nimoy was pitching the idea for the neck pinch, the episode's director, Leo Penn, asked about it and Nimoy said that Spock was a graduate of the "Vulcan Institute of Technology." (He had probably conflated this with the Vulcan Science Academy, which Spock was not known to have attended.) There, as Nimoy explained to Penn, Spock had taken a number of courses on Human anatomy. Nimoy also told Penn that Vulcans emitted a kind of energy (he never specified what kind of energy it was, but presumably he meant bio-electrostatic energy, which was probably also used in mind melds) from their fingertips, which, when applied to certain points on a Human's neck, renders the Human unconscious. Though Penn apparently had no idea what Nimoy was talking about, when Nimoy explained it to William Shatner, the latter understood the concept immediately. Thereafter, Nimoy credited Shatner's reaction for having sold the idea of the neck pinch. (25 Year Mission Tour video)

Robert Hewitt Wolfe commented that Odo's use of the Vulcan nerve pinch in "Paradise Lost" was scripted by the writers to avoid having to spend money on Changeling morphing special effects in a scene where Benjamin Sisko is freed from detention. Rene Auberjonois commented that he did not know where Odo had learned the Vulcan nerve pinch, but that "Odo is a man of many talents." (Star Trek: Deep Space Nine Companion (p. 303))

In the novelization of Star Trek IV: The Voyage Home, author Vonda N. McIntyre had Admiral James T. Kirk performing a Vulcan nerve pinch to stop one of the 20th century Earth doctors, who tries to prevent Dr. Leonard McCoy from doing a high-tech, non-invasive repair of Pavel Chekov's middle meningeal artery in a hospital scene in that movie. In the novelization, after Kirk successfully uses the nerve pinch, he says, "That never worked before, and will probably never work again."

In the Star Trek RPG, published by Last Unicorn Games, the nerve pinch is part of the martial art Taroon-Ifla, the only known martial art which consists of a single advanced technique. Presumably, Taroon-Ifla includes nearly endless variations and applications of the nerve pinch (the Taroon), making it effective on an assortment of lifeforms and includes less aggressive functions, such as healing techniques similar to acupressure.