Warp core is the common designation for the main energy reactor powering the propulsion system on warp-capable starships. During the 22nd century, warp reactors aboard NX-class starships were technically known as the "Gravimetric Field Displacement Manifold". (ENT: "Cold Front")

On Federation starships, the warp core usually consists of a matter/antimatter reaction assembly (M/ARA) utilizing deuterium and antideuterium reacting in a crystal matrix. Lithium crystals were used until sometime between 2265 and 2266 when they were replaced with dilithium crystals.

As a safety precaution, the core can be physically ejected from the ship should such an event occur and the crew decides it cannot be corrected.

The antimatter containment, also protected by magnetic fields, funnels the antimatter to injector coils, which precisely compresses and streams the antimatter into the form which enters the dilithium articulation frame. Deuterium, stored in the ship or attracted by the Bussard collectors, is funneled in a stream from the opposite deuterium injector. The molecules enter the lattice matrix of the crystallized dilithium, reacting within it and releasing a tuned energy stream in the form of electro-plasma, a highly energetic form of plasma. The electro-plasma is carried by magnetic plasma conduits throughout the power transfer system. In the Federation power transfer grid, this is the electro-plasma distribution network, comprising of EPS conduits and EPS taps. The most energized stream created is the warp plasma, which exits in twin power transfer conduits connected to the warp nacelles.

During the 23rd century, dilithium crystals were also used in Klingon warp reactions to generate energy at sufficient levels to enable warp flight. A difference noticed in the 24th century was that Klingon engines use a tritium intermix (tritium/antitritium) rather than a deuterium intermix.

On Romulan starships, a different approach is used; an artificial quantum singularity in the warp core is used to harness the energy necessary to power warp flight.

In 2369, Quark and Barbo sold defective warp cores to the Tarahongians. (DS9: "The Nagus")

The warp core of a Constitution-class refit starship 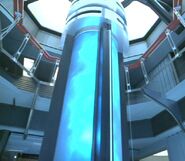 The warp core of a Sovereign-class starship
ArtificialQuantumSingularity.jpg
The warp core of a D'deridex-class warbird
Add an image to this gallery
Retrieved from "https://memory-alpha.fandom.com/wiki/Warp_core?oldid=387804"
Community content is available under CC-BY-NC unless otherwise noted.