A weapons locker was a storage area for firearms aboard Federation starships, shuttlecraft, and outposts. These lockers were typically accessed through a simple touch interface or voice command to authenticate authorized access by Starfleet personnel.

Depending on the purpose and size of a weapons locker, it could store phasers, phaser rifles, portable weapons containers, and other standard Starfleet personnel equipment. Phaser rifles were regularly stored with the muzzle facing upwards for ease of retrieval, and phasers were placed in a manner in order to optimize storage space. (Star Trek: First Contact; Star Trek VI: The Undiscovered Country)

Larger weapons lockers were designed to hold space-combat weapons, such as photon torpedoes before they were automatically loaded into the firing bay. (DS9: "Tribunal"; TNG: "In Theory")

Although most weapons lockers were placed in strategic locations such as in armories, near transporter rooms, shuttlebays, or security offices, certain starships, such as the Constitution-class USS Enterprise-A, had a weapons locker in the kitchen. (Star Trek VI: The Undiscovered Country)

In the final revised draft script of "The Conscience of the King", two weapons lockers were implied as being on H deck, with the starboard one specifically referred to.

In the early 2150s, Captain Archer once expressed shock when Commander Tucker stated that all fourteen weapons lockers had been emptied by marauding Ferengi. (ENT: "Acquisition")

In 2266, Lieutenant Kevin Riley broke into the weapons locker on H deck of the Enterprise and stole a phaser from it, intending to use the weapon to murder Anton Karidian. (TOS: "The Conscience of the King")

In 2372, Tuvok wanted to talk to Captain Janeway about weapons storage aboard the USS Voyager. (VOY: "Persistence of Vision")

In 2373, Janeway accessed a weapons locker in engineering to combat the macrovirus aliens. (VOY: "Macrocosm") 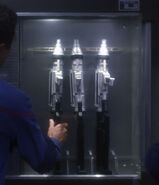 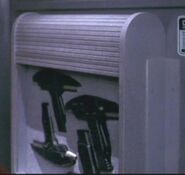 The first canon reference to a weapons locker was in TOS: "The Conscience of the King".

For the weapons lockers seen on Star Trek: Deep Space Nine, real-life containers were used but were modified so that it was not visible on screen that they had previously served another function. In "Hard Time", however, Chief O'Brien opens a locker and some letters can be seen on the inside of the lid; those letters were not made unreadable. On the screenshot to the right (turned 180 degrees and mirrored), the words "Action Packer" are legible. In real life, "Action Packer" is a line of storage containers by Rubbermaid. [1]

In Star Trek Nemesis, a Sovereign-class weapons locker was built as a set on Paramount Stage 17. (Information from shooting schedule)