A wedding dress or wedding gown was a specific type of dress, usually worn by females at their wedding.

In 1947, Jeff Carlson admitted that he was having a hard time thinking of anything but how his fiancee Garland would look in her wedding dress. (DS9: "Little Green Men")

In 2268, the bridegroom's mother gifted a wedding dress to her future daughter-in-law, the Dohlman of Elas Elaan. Petri tried to give it to her, but she initially rejected it and some Troyian jewels, which she regarded as "female trappings", though she later agreed to wear them for the wedding. (TOS: "Elaan of Troyius")

Keiko O'Brien wore a traditional Japanese wedding dress during her wedding with Miles O'Brien aboard the USS Enterprise-D in 2367. (TNG: "Data's Day")

In late 2373, Rom and Leeta discussed which style of wedding dress Leeta would wear since she would not agree to being naked as in a traditional Ferengi wedding. Garak showed them 153 different styles of wedding dress from Tellarite modern to Risian traditional, but they couldn't agree on anything. Tora Ziyal then suggested that they let Garak design one. When the wedding later took place, Quark called the bride "severely overdressed". (DS9: "Call to Arms") 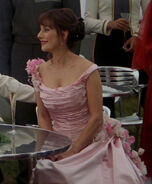 Retrieved from "https://memory-alpha.fandom.com/wiki/Wedding_dress?oldid=2654931"
Community content is available under CC-BY-NC unless otherwise noted.