What Lay Beyond is the seventh and final novel in the Gateways miniseries – containing the conclusions to the events of the previous six novels. Published by Pocket Books, it was first released in hardback in November 2001.

From the book jacket
Created by the ancient Iconians, the Gateways offer instantaneous transport across unimaginable distances. Throughout the known galaxy, the sudden reactivation of the Gateways has destabilized interstellar relations – and forced several of Starfleet's finest commanders to leap through separate Gateways into the unknown.

All of these heroes have taken the ultimate gamble: hurling themselves through a Gateway without any forewarning of what lay beyond. Now each must face his or her own unique challenge, while struggling to find a way back to the ships and homes left behind…

One Giant Leap
by Susan Wright, from One Small Step.

Exodus
by Diane Carey, from Chainmail.

Horn and Ivory
by Keith R.A. DeCandido, from Demons of Air and Darkness.
Kira Nerys finds herself stranded on Bajor, some thirty thousand years before her time. She gets engaged in a civil war, fighting alongside General Torrna Antosso on the Perikian Peninsula, and she later becomes his adjutant. It is the days when Bajor was still broken up into different factions, but already, the "Bajora" try to unite the planet - with the help of the Prophets. Kira and Torrna later become prisoners during the waves of the war, but they manage to escape. Back on the peninsula, Torrna is desperate - his wife and his children were all killed during the war. Kira tries to cheer him up and reminds him of his duties. In the meantime, the Fire Caves have collided, it was the time when the Prophets captured the Pah-wraiths there. Kira finally travels to the Fire Caves and finds another Iconian Gateway there. When she steps through it, she briefly meets an alien which apparently is truly an Iconian, and he sends her back to Deep Space 9.

In the Queue
by Christie Golden from No Man's Land.

Death After Life
by Peter David, from Cold Wars.

The Other Side
by Robert Greenberger, from Doors Into Chaos. 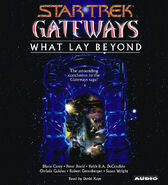