A wheelchair, or support chair, was a wheeled device used to permit locomotion in a humanoid who had lost the ability to use his or her legs. It was also used by people who could walk, but had a limited ability to do so. By the 23rd century, wheelchairs began to use antigravity technology to appear in the form of hoverchair.

In 2004 in Detroit, Lawrence Strode used a wheelchair. It was taken by Loomis – when he abducted Strode – to a makeshift infirmary in an abandoned factory formerly run by the American Wrecking Company, along with Strode himself, who Loomis rendered unconscious. The wheelchair's arrival was secretly watched by time travelers Jonathan Archer and T'Pol. The same wheelchair was subsequently used by Loomis to wheel an apparently unconscious Archer into the makeshift infirmary. (ENT: "Carpenter Street")

The use of the wheelchair for Archer wasn't scripted, as Loomis was instead intended to "drag" Archer's body into the makeshift infirmary.

In 2024, there was a wheelchair in the lobby of the Clinica Las Mariposas when Seven of Nine and Raffaela Musiker were there searching for Cristóbal Rios, who was arrested by ICE. (PIC: "Watcher")

The inventor of the transporter, Emory Erickson, used a wheelchair after being paralyzed in a transporter experiment which had resulted in an accident. (ENT: "Daedalus")

Wheelchairs continued to be used in the 23rd century. The USS Kelvin had at least one wheelchair. This was used in the alternate reality to transport the heavily pregnant Winona Kirk from sickbay to Medical shuttle 37 during evacuation from the Narada's attack. (Star Trek)

Another wheelchair was used by a crewmember aboard the USS Discovery shortly after the end of the Federation-Klingon War. (DIS: "Brother")

A wheel-less wheelchair-like device called a hoverchair was earlier seen used by the same crewmember during the war, in "Magic to Make the Sanest Man Go Mad".

In 2258 of the alternate reality, Admiral Christopher Pike used a wheelchair due to injuries suffered during his captivity on board the Narada. (Star Trek)

After he was injured in a training accident, Fleet Captain Christopher Pike became a wheelchair user, unable to walk or speak. The wheelchair provided movement, as well as simple communication via a series of lights on the front of the device. Pike was given the illusion of leaving the wheelchair when his former colleague Spock brought him to Talos IV aboard the USS Enterprise in 2268. (TOS: "The Menagerie, Part I", "The Menagerie, Part II")

In the 2320s, Jean-Luc Picard had an Academy teacher who had been confined to a wheelchair since birth. (TNG: "The Loss")

In 2360, Admiral Mark Jameson had to use a wheelchair due to the debilitating effects of Iverson's Disease. He left the wheelchair four years later after taking a rejuvenation treatment on the planet Cerberus II, which cured the disease and caused him to become appreciably younger. However, in a bid to speed up the process he knowing took double the amount of the treatment which was only meant for two people, which proved to be deadly for Humans. (TNG: "Too Short a Season")

Melora Pazlar used what she referred to as a "trolley car" to move around in areas of high gravity due to her being an Elaysian, which prevented her from a full range of movement while in high gravity areas. She sent the specifications of the wheelchair to Julian Bashir before her arrival on Deep Space 9 in 2370. A low-technology version with wheels had to be used because Cardassian artificial gravity technology was not compatible with a standard Federation anti-grav unit. Upon viewing the device, Jadzia Dax exclaimed that she had not seen one in three hundred years. (DS9: "Melora")

Pike's wheelchair in an illusion 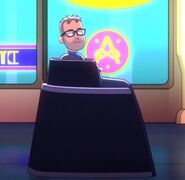 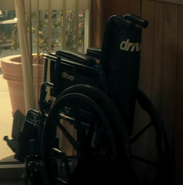 The use of a wheelchair prop in the "The Menagerie" two-parter was meant to help camouflage the fact that a replacement actor was going to be playing Christopher Pike, instead of Jeffrey Hunter. (Star Trek: Aliens & Artifacts, p. 38) When Gene Roddenberry initially interviewed Sean Kenney about taking the part, Roddenberry stated, "All questions posed to you will be answered by you with a button, 'one beep' for yes and 'two beeps' for no, on a specially rigged light system, out of sight of the camera." (Captain Pike Found Alive!, "Chapter Two: Ground Zero") The prop consisted of an actual wheelchair which was motorized and outfitted with an outer plastic shell. Kenney himself maneuvered the wheelchair and operated the light. (Star Trek: Aliens & Artifacts, p. 40)

Admiral Jameson's chair, as seen in "Too Short a Season", cost US$10,000 to make, and often malfunctioned during filming. (Star Trek: The Next Generation Companion (1st ed., p. 43))

The design of Melora's chair was greatly influenced by writer Evan Carlos Somers' personal experiences of navigating the studio offices. As Somers explained, "So Bashir has to replicate a much simpler wheelchair for her and she encounters all the problems that I did whenever I went down to the DS9 set to snoop around." (Star Trek: Deep Space Nine Companion (p. 93))

Set Decorator Laura Richarz purchased the chair, which was revamped by Property Master Joe Longo. Longo later remembered how the production crew decided to keep the wheelchair as simple as possible, recalling that he "added a control panel and some wheel covers to block out the spokes in the wheels, and changed the joystick. Basically we tried to keep it as simple as possible, because of our experience on 'Too Short a Season'. We had made a big albatross of a moving chair for that, and it was bad. But this one worked great; the actress drove it everywhere." (Star Trek: Deep Space Nine Companion (p. 93))