"When The Bough Breaks"

Wesley Crusher must protect a group of kidnapped Enterprise-D children while Captain Picard fights for their release.

While investigating faint energy readings coming from the Epsilon Mynos system, the crew of the USS Enterprise-D are witness to the revealing of the legendary planet Aldea.

A woman contacts the Enterprise and introduces herself as Rashella, welcoming them and wishing to talk with them. Suddenly, she and Radue, introducing himself as the leader, appear on the bridge, startling everyone, notably Dr. Crusher, as they did not undergo decontamination procedures by going through the transporter, but they quickly explain that the Enterprise's transporters won't work because of the planet's shields. They formally invite them to the planet, but also show visible signs of discomfort, which they justify by not being used to bright lights and soon afterwards they beam back on the planet.

Without warning, Commander Riker, Deanna Troi, and Dr. Crusher are transported to the surface of Aldea, and they're welcomed to their community. However, the Aldean's motives are quickly revealed, as Radue explains that he wishes to acquire some of the Enterprise's children, in exchange for technology. This outrages both Riker and Crusher, and Troi explains that Humans are very attached to their children; other species might be tempted. Then Radue explains that the Aldean society is dying out, and they've become infertile. Riker expresses his sympathy, but declines their trade offer. Radue promptly returns them to the ship.

Meanwhile, strange beams of light come from the planet, scanning everyone on board but focused only on the children, such as Wesley Crusher on the bridge. Data reaches out to help him, but Picard warns him not to touch the teen, as they may unknowingly harm him. Suddenly to Dr. Crusher's alarm, Wesley is beamed away by the Aldean's transporter, and the disappearances of several other children across the ship are reported.

The Captain is infuriated, and contacts Radue, demanding to have their children back. Radue appears on the viewscreen and informs Picard that the children will be well looked after, and that they'll want for nothing. He wants to discuss compensation, but Picard's response prompts him to close communication. Picard and Dr. Crusher along with Troi have a meeting with the other parents in the conference lounge to explain what's happened. Picard will have Dr. Crusher with him to represent the other parents, and assures them that the Enterprise will not leave without the children.

On Aldea, Wesley and the children meet their new foster parents, and are quickly enticed by the skill-enhancing instruments that are offered to them. Wesley, however, is not impressed by the Aldeans and resists. Radue attempts to label him as the leader of the group, and gives him the task of helping the others adjust since he has no choice, like the Aldeans.

Riker reports that Data has discovered random fluctuations in the shield, holes in essence, that could possibly be used to transport an away team through. Riker is surprised that the Aldeans haven't perfected their technology after all this time and eliminated the flaw. As using a hole would have to be precise with timing and there would be no guarantee, Data notes it may be better to crack the code used to transport through the magnetic shield, but it will take time as the sheer number of possible codes is almost endless. While Data works on it, Picard orders Riker to work with La Forge to figure out a way through a hole. An away team can then find the power source for the shield and neutralize it; Picard knows that they have to keep the Aldeans talking, because once they realize the crew will not accept anything but the childrens' return, they will just turn the cloaking device back on and the Enterprise will have lost any chance to get them back.

Duana introduces Wesley to the Custodian for storing records of him. Wesley immediately wants to know more about the computer system, which takes care of the Aldeans' every need. He asks about what the other children are doing and interacts with the Custodian and learns the controls. He also asks what's behind one of the doors, but Duana admits that she doesn't know.

Picard and Dr. Crusher are transported to the planet to negotiate for "compensation" for the children. They refuse to give the children back, thinking that it's not a problem as they can have more children, but the captain warns that the Aldeans are messing with a primal Human instinct and that parents are willing to die if necessary for their children. To Crusher's questions about the children's future fertility, Radue is convinced that the problem is a genetic dysfunction and not contagious. Picard nevertheless remains amicable and says they sympathize with the Aldeans and is open to a satisfactory solution to both sides. The Aldeans see their problem as solved and they're offering the sum of their knowledge: what more could they want? Picard manages to convince him to let Dr. Crusher see Wesley. While with him, she coordinates a covert scan of Duana with the hand scanner from her medical tricorder. Rejoining Picard, she reports her son and the others are well; Radue states that the crew have their offer, which is final, and the away team is sent back to the ship.

Radue decides to show the Enterprise that there is no bargaining room and displays the planet's power by blasting the ship, and throwing it back in ten seconds the equivalent distance of three days travel from the planet at warp 9. He claims that he could very easily push the Enterprise so far away that by the time they returned to Aldea, their children would be grandparents.

During the return trip to Aldea Picard tells Radue that there is room for discussion and ends the communication. Dr. Crusher has analyzed the covert scan and discovers that Duana is dying, suffering from some chromosomal damage, probably like the rest of the population. Crusher can't determine if it is genetic or environmental, so leaves to determine the cause.

On Aldea, the children each show signs of dissatisfaction while being taught their respective activities. Wesley, however, firmly says to Radue and Duana that they will not cooperate. That night, he decides to convince the younger children to go on a hunger strike and to not speak to their hosts, in an attempt to make the Aldeans return them to the ship. Using the Custodian, he locates all the children and explains to them that it is a form of passive resistance. He assures them that while the Aldeans may become upset, they will not harm them as they need them. While a couple are not sure, he reminds them that while the Aldeans are very nice, they all want to go home and gets the mutual solidarity he needs. Rashella walks in and finds them.

Upon the Enterprise's return, Crusher confirms the Aldeans are suffering from acute radiation poisoning, which is causing the infertility. It also explains their pallor, general lack of appetite and sensitivity to light. While Data says it would take too long to decode the Aldean's transporter beam, La Forge has found that the holes in the shielding can be used to beam down a team with the right timing. When Radue beams Picard and Crusher down to negotiate, Worf carefully orders the transporter officer to beam Riker and Data down to Aldea in a discreet location. They are successful and locate the Custodian.

Radue meets with Picard and Crusher and first demands that he make the children end their strike. Picard goes to the children and surprises Radue by taking them back to him and reveals that Riker and Data are on the planet. Crusher tries to convince Radue that the cause of their infertility is the planetary shield and cloaking device affecting their ozone layer, similar to Earth in the 21st century. Eventually, the children will become affected as well. Radue does not believe her, insisting that their scientists would've known but Crusher retorts that they have been so reliant on their technology, they've stopped questioning it or know how it works. Radue attempts to beam the officers away but his commands to the Custodian are not responding; Riker and Data have temporarily disabled it. Picard has the Enterprise to beam up the children, but not before young Harry Bernard says goodbye to his "adoptive" father, Accolan. When they are gone, Radue is convinced that Picard has destroyed them. The captain says they are doing the exact opposite.

The Aldeans, led by the Starfleet personnel, go to the mysterious door and find what Data identifies as the power source. Radue muses that they need to relearn how to look after themselves and use the power source safely. Picard offers their help, which is gladly accepted. The crew successfully reseeds Aldea's ozone layer: neither the cloak nor the shield can ever be used again if they want to preserve it.

On the Enterprise, Dr. Crusher reports that the population is responding well to treatment, and will become fertile in time. Picard remarks that while the planet's legend will die, its people will live. They leave Aldea, but not before Wesley escorts Alexandra, one of the children, to the bridge as she wants to thank and hug Picard. When she leaves, everyone on the bridge giggles behind the captain's back as Alexandra's plush toy, a Tribble, has become accidentally stuck to his back.

"Data, find a way to defeat that shield."
"That may be impossible, sir."
"Things are only impossible until they're not!"
"Yes, sir."

- Riker, to Picard after the fabled planet suddenly appears in front of the Enterprise

"We need some of your children."

"Our children are not for sale at any price."

- William Riker, to Harry Bernard after he runs into him

"You've stolen our children away from their classrooms, away from their bedrooms and you talk about compensation?! You claim to be a civilized race and yet for some reason you have just committed an act of utter barbarity!!"
"Captain, we will continue these discussions when you have calmed down."

"The Aldeans are suffering from a form of radiation poisoning."
"Is that what made them sterile?"

"Instead of the children being our hope, what if we're just condemning them to our fate?"
"Rashella, they're just protecting their own interests."
"As are we. But hear them out. The captain and Doctor Crusher are saying that the very thing which has given us this wonderful world is what has caused this tragedy."
"That's it. Exactly. Your Custodian has controlled you so completely you've lost even the desire to even question it."

"The legend will die but the people will live."

"Dad, I want to be an artist, but I don't want to take calculus anymore."
"You can be anything you want, Harry. Anything. But you still have to take calculus."
"Okay. Thanks, Dad." 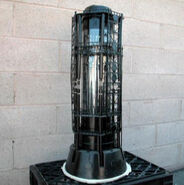 Retrieved from "https://memory-alpha.fandom.com/wiki/When_The_Bough_Breaks_(episode)?oldid=2510075"
Community content is available under CC-BY-NC unless otherwise noted.