Who Mourns for Adonais? (episode)

After a couple of failed attempts to break free of the "hand" holding the Enterprise in space, scanner five-seven displays the ghostly, laurel-wreathed head of a man. Claiming the eons have passed, he welcomes the Enterprise crew, congratulating his "beloved children" for leaving their plains and valleys and making a "bold venture" into deep space. Among other things, this being claims familiarity with Earth of five thousand years ago, dropping the names of individuals alive then. Captain Kirk's repeated demands for freedom finally irritate him, and he threatens to "close his hand" and crush the ship – a threat sufficiently credible that Kirk agrees to visit the planet with his officers, expressly omitting Spock, with the being saying that the Vulcan reminds him of Pan, whom he had always found boring.

The landing party consists of Kirk, McCoy, Scott, Chekov, and Palamas, who is trained in archaeology, anthropology, and ancient civilizations, all fields likely to be of some use. Materializing on the surface, the five crew members meet the being responsible for their capture, a being familiar with ancient Earth, who introduces himself as Apollo. Despite his claims, McCoy's tricorder scans show him to be a "simple humanoid". Changing to an enormous height, Apollo looks down at Kirk and the crew, and in a loud, booming voice, he intones, "Welcome to Olympus, Captain Kirk!"

Apollo, meanwhile, has taken Palamas away from the rest of the Enterprise crew. He tells her the gods left Earth when mankind turned away from them, and that they need admiration just like Humans need food. They returned to their home, an empty place without worshipers. But they lacked the strength to leave, and so they waited. And over the course of time, all but Apollo discorporated. Apollo claims the gods are immortal, and cannot die – not, at least, in the way Humans understand death. But even they eventually reach a point of no return; they "spread themselves upon the wind… thinner, and thinner, until only the wind remained…" He then mentions that he "knew [Carolyn] would come to the stars" and be forever by his side as his queen. Palamas doesn't understand, but Apollo seduces her by saying that fifty centuries ago, gods took mortals with them to love and care for, as his parents did.

Palamas has fallen in love with Apollo, who has told her she will be his consort, the mother of a new race of gods, and will inspire men throughout the universe. Palamas is returned to the landing party, weakened but content. Palamas tells Kirk of Apollo's plans for the crew to live on the surface of the planet, but Kirk tells her she has work to do after noticing her weakened state. "All our lives, here and on the ship, depend on you." She must spurn Apollo; to do otherwise condemns the crew to "nothing less than slavery." Kirk reminds her of her loyalty to Humanity, since that is where her duty (and his) lie. Palamas reveals her sympathy for Apollo's plan, but Kirk speaks to her of duty, orders, and the Humanity she shares is tied together beyond any untying with Kirk and others that she cannot share with Apollo. Kirk seems to be getting through to Palamas – when Apollo summons her back. She says "He's calling me," but no voice is heard. It's uncertain whether Apollo uses some form of telepathy to summon her. Kirk reminds her of her duty once more before she disappears.

"I have four hundred and thirty people on that ship up there!"
"Not anymore, Captain! They are mine now. To save, to cherish, or to destroy at my will." 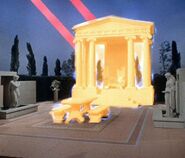 …and the remastered counterpart