Whoopi Goldberg (born 13 November 1955; age 66) is the actress and comedian who portrayed Guinan on occasion from Season 2 through Season 6 of Star Trek: The Next Generation. She also appeared uncredited as Guinan in the films Star Trek Generations and Star Trek Nemesis. She earned a Saturn Award nomination as Best Supporting Actress from the Academy of Science Fiction, Fantasy & Horror Films for her appearance in Generations.

Goldberg was born in New York City, New York, USA, as Caryn Elaine Johnson. As a young girl, she saw Nichelle Nichols on Star Trek: The Original Series and ran to her mother, shouting, "There's a black lady on TV and she ain't no maid!" She was eager to appear in the film Star Trek VI: The Undiscovered Country and there was some discussion about her possibly portraying a Klingon princess, though the idea was declined by Leonard Nimoy. (The View from the Bridge, hardcover ed., p. 211) Goldberg is a "huge fan" of The Next Generation and was eager to star in the show. She was later responsible for getting Dwight Schultz his role as Reginald Barclay on The Next Generation, having co-starred with Schultz in the 1990 film The Long Walk Home. [1](X)

Director Les Landau recalls, "Whoopi is a pleasure to work with. She's very, very creative and inventive. From a personal point-of-view, what was really thrilling was that I was the first director in Hollywood to work with Whoopi after she won the [Best Supporting Actress] Oscar for Ghost. Whoopi is enthusiastic. Whenever she gets on the set, she knows how to approach the scene. And her instincts are generally right." (The Official Star Trek: The Next Generation Magazine issue 21, p. 46)

The writers of the Star Trek: Deep Space Nine second season episode "Rivals" intended the character of Martus Mazur to be a son of Guinan who was also to appear in the episode, but Whoopi Goldberg was unavailable. (Star Trek: Deep Space Nine Companion (p. 109)) Both she and Chris Sarandon, who was cast to play the rewritten character, appeared in the 1996 motion picture Bordello of Blood. DS9 guest star William Sadler also starred in the movie.

Goldberg trained under famed acting teacher Uta Hagen at the HB Studio in New York. A comedic and acting talent since the 1980s, Goldberg made her first screen appearance in the 1981 ensemble film Citizen: I'm Not Losing My Mind, I'm Giving It Away, opposite Star Trek VI: The Undiscovered Country and TNG actor Darryl Henriques. In 1983, she conceived her own one-woman play, The Spook Show. The play was brought to Broadway in October 1984, simply titled Whoopi Goldberg, and ran for 156 performances through March 1985. The production won Goldberg a Theatre World Award and Drama Desk Award for Outstanding One Person Show.

Goldberg's breakthrough film role came with her portrayal of Celie Johnson in Steven Spielberg's 1985 drama, The Color Purple opposite Leon Rippy. She earned an Academy Award nomination as Best Actress in a Leading Role for her performance in this film. Also earning Oscar nominations for their work in this film were set designer Linda DeScenna and music adaptor Fred Steiner.

In addition to her Oscar nomination, Goldberg won a Golden Globe, an Image Award, and a National Board of Review for her role in The Color Purple. She followed this film with an Emmy Award-nominated guest appearance on the television series Moonlighting. In the latter half of the 1980s, Goldberg starred in six feature films, including 1986's Jumpin' Jack Flash (co-starring Stephen Collins, with cinematography by Matthew F. Leonetti), 1987's Fatal Beauty (with Brad Dourif and Harris Yulin), and 1989's Homer and Eddie (featuring Tony Epper, Tommy "Tiny" Lister, Jr., Nancy Parsons, Jimmie F. Skaggs, Vincent Schiavelli, and Tracey Walter; production management by Marty Hornstein).

Since the 1980s, Goldberg has been hosting the Comic Relief HBO specials with fellow comics Billy Crystal and Robin Williams. The fourth show featured actress Pam Pruitt-McGeary. The three of them shared an Emmy nomination for hosting 1995's Comic Relief VII. During one of the Comic Relief specials, the bridge crew of the USS Enterprise-D finds an old VHS cassette of the special, including a screen capture of the three hosts, mispronouncing her name as "Whoo-pie" and noticing, but dismissing, the resemblance to Guinan.

She received her second Academy Award nomination – and her first win – for her supporting role as psychic Oda Mae Brown in the 1990 film Ghost, which also starred Stephen Root and Vincent Schiavelli. Other awards she won for this role include a Golden Globe, an Image Award, a Saturn Award (from the Academy of Science Fiction, Fantasy & Horror Films), and a BAFTA (British Academy of Film and Television Arts) Award. Goldberg later received an Emmy Award nomination (her second) for a 1991 guest appearance on A Different World.

Among Goldberg's best known starring roles is that of Delores Van Cartier, aka "Sister Mary Clarence", in the 1992 comedy Sister Act, for which she won an Image Award and received nominations from the Golden Globes and the MTV Movie Awards. She reprised the role for the 1993 sequel Sister Act 2: Back in the Habit. Her other film credits during the early 1990s include Soapdish (1991, with Teri Hatcher), Made in America (1993, co-starring Clyde Kusatsu), and Corrina, Corrina (1994, featuring Brent Spiner). She also had a cameo at the beginning of National Lampoon's Loaded Weapon 1, starring William Shatner.

Goldberg hosted the Academy Awards ceremony in 1994 and again in 1996. She received Emmy nominations for Outstanding Individual Performance in a Variety or Music Program for both occasions.

Goldberg was among the many Star Trek performers to appear in the 1996 drama Ghosts of Mississippi. Among her co-stars in this film were Bill Cobbs, Spencer Garrett, Jerry Hardin, Thomas Kopache, Jordan Lund, Virginia Madsen, Terry O'Quinn, Brock Peters, Richard Riehle, Bill Smitrovich, and Susanna Thompson. Goldberg followed this with supporting roles in such films as How Stella Got Her Groove Back (1998), The Deep End of the Ocean (1999), and Girl, Interrupted (1999). In the 2001 comedy Rat Race, Goldberg played the mother of Lanei Chapman's character, both involved in a chaotic race to win $2 million. That film also featured Peggy Jo Jacobs and Andrew Kavovit. That same year, Goldberg made a cameo appearance in The Hollywood Sign, starring Dominic Keating.

Goldberg has also lent her voices to a number of projects. Perhaps most notable among these is her voice role as Shenzi the hyena in Disney's hit 1994 film, The Lion King (the late Madge Sinclair voiced Sarabi in this film). She also voiced Gaia on the animated series Captain Planet and the Planeteers, working with her TNG co-star LeVar Burton.

In The Pagemaster that same year, Goldberg and her Next Generation co-star Patrick Stewart and voice artist Frank Welker were heard as a trio of talking books. Christopher Lloyd starred and voiced in this film, as well, while George Hearn, Robert Picardo, and Leonard Nimoy also had voice roles; Ed Begley, Jr. had an acting role in the film. More recent voice credits include as a ranger in 1998's The Rugrats Movie and the voice of the title reindeer in LeVar Burton's Blizzard.

From 1998 through 2002, Goldberg was the producer of the popular game show Hollywood Squares. She also regularly occupied the famous "center square" on the show. Goldberg received four Daytime Emmy Award nominations as the show's producer.

Goldberg shared a Tony Award as one of the producers of the Broadway play, Thoroughly Modern Millie. She also won a Daytime Emmy Award as host of the 2001 TV documentary Beyond Tara: The Extraordinary Life of Hattie McDaniel. She earned her latest Emmy nomination for a 2005 televised broadcast of the revival of her one-person play entitled Whoopi: Back to Broadway – The 20th Anniversary.

In August 2007, it was announced that Goldberg will become the new moderator on the ABC talk show The View, replacing the controversial Rosie O'Donnell. Goldberg joined the show on 4 September. [3] {{el|cnn.com/2007/SHOWBIZ/TV/08/01/view.whoopi/index.html?eref=rss_mostpopular]

Goldberg hosted the 62nd Annual Tony Awards at the Radio City Music Hall in New York City on 15 June 2008. Her TNG co-star, Patrick Stewart, was a 2008 nominee for his performance in the Broadway production of Macbeth. [4] [5]

Goldberg can be seen in the new film For Colored Girls written and directed by Tyler Perry. 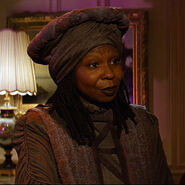