Richard William Wheaton III (born 29 July 1972; age 49), better known as Wil Wheaton, is an American actor and writer best known for playing Wesley Crusher on Star Trek: The Next Generation throughout its first four seasons. Although he left the show following "Final Mission", he returned as a guest star four more times – twice in the fifth season and twice in the seventh season.

More recently, Wheaton was briefly seen as Wesley at the beginning of Star Trek Nemesis during William T. Riker and Deanna Troi's wedding. Most of his scenes from this movie were cut, but they can be found on the Special Edition DVD. According to his blog, in 2009, Wheaton returned to the Star Trek franchise when he voiced members of Nero's Romulan crew in J.J. Abrams' Star Trek, among others the one played by Joe Quinto. ([1]; Star Trek DVD/Blu-ray Disc releases, audio commentary)

On 18 January 2017 it was announced that an asteroid has been named after him, 391257 Wilwheaton. He shares this honor with fellow Trek alums George Takei and Nichelle Nichols, as well as Gene Roddenberry himself. [2]

Wheaton was born in Burbank, California. He married Anne Prince in 1999. He lives with his wife and two stepsons in Pasadena, California.

Wheaton made his television acting debut in the 1981 movie A Long Way Home, in which he played the younger version of the lead character. He then voiced the character of Martin in the popular 1982 Don Bluth film The Secret of NIMH (which featured a score by Jerry Goldsmith), after which he appeared in the films Hambone and Hillie, The Buddy System, and The Last Starfighter. Wheaton had a speaking role in the latter film, but the scenes featuring his dialogue were cut in post-production. Marc Alaimo, Barbara Bosson, and Meg Wyllie also appeared in The Last Starfighter.

Prior to being cast as Wesley Crusher, Wheaton was best known for his role as Gordie LaChance in the acclaimed 1986 film Stand by Me, directed by Rob Reiner and costarring Jerry O'Connell in the latter's acting debut. The following year, Wheaton guest-starred on an episode of Family Ties, appearing with Brian Bonsall. Bonsall began appearing on TNG as Alexander Rozhenko just as Wheaton was leaving that series. Also in 1987, Wheaton appeared in the TV movie The Man Who Fell to Earth with Robert Picardo and Bruce McGill and starred in the horror film, The Curse, along with his sister, Amy.

When TNG was originally being developed, the character of Wesley Crusher was actually a girl named "Leslie Crusher". It was writer David Gerrold who suggested to Gene Roddenberry that the character be a boy and recommended Wheaton for the part. Robert Justman also advocated Wheaton's casting, and following a typical audition, the young actor ultimately won the role. [4]

Wheaton received three nominations from the Young Artist Awards for his role as Wesley Crusher, winning one of them. Although he enjoyed his time on TNG and praises the work of his fellow actors on the show, Wheaton has been vocal in his dislike of his own character, echoing the sentiments of the more vocal fans who found the character to be annoying.

Wheaton left the show as a regular in the fourth season so he could pursue offers to appear in feature films. The producers intentionally left open the possibility of Wheaton returning in guest appearances, and he did so in four later episodes. (Star Trek: The Next Generation Companion (2nd ed., p. 149)) Wheaton noted that "Patrick [Stewart] never treated me like I was a kid. We had directors who treated me like I was a kid." He also saw Stewart as someone he always learned from when acting with him. ("Selected Crew Analysis Year Four – Crew Profile: Wesley Crusher", TNG Season 4 DVD special feature)

After TNG, Wheaton portrayed the character of prep-school denizen Joey Trotta in the 1991 film Toy Soldiers, with Michael Champion. He co-starred with DS9 actor Aron Eisenberg in the 1993 independent drama The Liars' Club and starred in the 1995 direct-to-video horror movie Mr. Stitch with Ron Perlman. He also had a supporting role in 1996's Pie in the Sky (which featured his TNG castmate Brent Spiner in a cameo).

Although he has worked primarily on independent films, he did make a brief return to mainstream cinema when he received a role in the 1997 Disney comedy Flubber with his "Yesterday's Enterprise" co-star Christopher McDonald, as well as Clancy Brown. His later independent film credits include Foreign Correspondents (1999), The Girls' Room (2000), and Jane White Is Sick & Twisted (2002). His performance in the latter film won him the Best Actor award from the Melbourne Underground Film Festival.

In 2000, Wheaton worked on two projects for the independent film production company, United Film Organization (UFO). The first was the sci-fi thriller Deep Core, in which he co-starred with DS9's Terry Farrell and Star Trek: Voyager guest actor Bruce McGill. The second was the horror flick Python, which co-starred Sean Whalen… and a really big snake.

In 2005, he guest-starred in an episode of CSI: Crime Scene Investigation with Voyager guest Wallace Langham. In October 2007, Wheaton shot an episode of the CBS series Numb3rs revolving around a sci-fi/comic convention. In the episode, entitled "Graphic," Wheaton portrays a loathsome comic book artist who is robbed of a rare and valuable comic he owns. The episode aired on 23 November, 2007 and also featured Star Trek III: The Search for Spock actor Christopher Lloyd as the artist of the book stolen from Wheaton's character.

Wheaton guest-starred on the CBS series Criminal Minds in an episode which aired 22 October, 2008. Wheaton posted a chronicle of his experiences on the set on his blog [5] and later in his most recent book Sunken Treasure. [6] He also appeared in the 26 August, 2009 episode of Leverage entitled "The Two Live Crew Job" with Noa Tishby.

In 2009, Wheaton appeared as himself – or, rather, an "evil" version of himself – in a guest role on the CBS sitcom The Big Bang Theory, in which his Star Trek persona as Wesley Crusher was emphatically acknowledged. In 2010, Wheaton announced on his Twitter account (and later his website) that he would be "playing Evil Wil Wheaton again" for an episode to begin taping on 2 March, 2010. [7] [8] Making good on his promise, Wheaton has subsequently appeared in a number of episodes of the series, having become the most frequent recurring guest star with a Star Trek pedigree. Wheaton reunited with co-star Brent Spiner on the series in the fifth season episode "The Russian Rocket Reaction". In the same episode, good-natured fun was poked at Wheaton's role in Stand by Me, when one of the main characters stated, "(…) but I chose to go to a party thrown by the one kid from Stand By Me that no one remembers." [9] It was partly on the strength of his performance in this movie that Wheaton was chosen for the role of Wesley Crusher. In total, Wheaton made seventeen guest appearances on The Big Bang Theory, in his last one, "The D & D Vortex" (2019), co-starring alongside fellow Star Trek alumnus William Shatner.

In 2010-11, Wheaton appeared on the SyFy series Eureka in a recurrent guest-starring role as Dr. Isaac Parrish, a scientist competing for a position on the Astreus Mission to Titan, as well as vying for Dr. Fargo's love interest. He and Fargo are quite often at odds, starting with when they were both campers at a science summer camp.

In late 2019, he had a guest cameo appearance in The CW hit television series, Supergirl, as a protester in the first part of the Arrowverse crossover event known as Crisis on Infinite Earths.

In recent years, Wheaton has been working prominently as a voice actor for several video games and animated TV shows. He can be heard in several Ghost Recon games, as well as EverQuest II. In three Grand Theft Auto games – San Andreas, Liberty City Stories, and Vice City Stories – he can be heard as radio news personality Richard Burns.

On television, Wheaton primarily voiced Aqualad on Teen Titans and Cosmic Boy on Legion of Super Heroes. His voice can also be heard in the Batman: The Brave and the Bold episode "The Fall of the Blue Beetle", in which he voices Ted Kord, the second DC Comics character to bear the name Blue Beetle. [10] In addition, Wheaton voiced himself in an episode of Seth MacFarlane's Family Guy in which he and his TNG cast mates (also providing their own voices) were kidnapped by Stewie Griffin (voiced by Seth MacFarlane). Wheaton has also been voicing the recurring role of Mike Morningstar aka Darkstar in Cartoon Network's Ben 10: Alien Force.

In November 2009, Wheaton revealed that he did ADR voice work on J.J. Abrams' Star Trek. Specifically, he provided the voices for all of the Romulans aboard the Narada, including those played in the film by Jason Brooks and Joe Quinto. Wheaton became involved with the film after Greg Grunberg, who also provided his voice for Star Trek, informed Wheaton that Abrams was looking for voice actors and asked if he would be interested. Excitedly answering in the affirmative (though thinking that it may be a prank), Wheaton received a call from Abrams shortly thereafter and was asked to come in to the ADR studio and record some dialogue. According to Wheaton, only after the recording session began did he know for sure that it was not a joke. Most of Wheaton's dialogue was altered to make each of his Romulan characters sound different. [11]

In 2008, Wheaton worked with Family Guy creator (and ardent Star Trek fan) Seth MacFarlane on the latter's web series, Cavalcade. [12] In 2009, Wheaton guest-starred in the third season of The Guild, an online-only show about players of a massively-multiplayer online role-playing game.

In 2013, Wheaton made a brief appearance in a commercial advertisement for Lincoln Motor Company automobiles, televised in the United States during the telecast of Super Bowl XLVII. [13]

Since his days on TNG, Wheaton has become a vocal representative and icon of the "geek" and "nerd" communities. He was one of the early internet "bloggers" and currently maintains his own blog called WIL WHEATON dot NET, in addition to making regular updates on Twitter. He is also a posting member at Slashdot ("news for nerds, stuff that matters"). Among his projects was blogging reviews of episodes of Star Trek: The Next Generation for TVSquad. [14] Following a reduction of the site's budget by AOL, however, the column was dropped. Wheaton then went on to expand on the columns and produced a book, Memories of the Future, Volume 1, in October 2009, with further volumes planned. He was also a regular host of InDigital, part of the Revision3 Internet TV network, prior to the show's end.

Wheaton has published two collections of short stories with a memoir, Just a Geek, being published between. He also contributed a story to the 2005 anthology Stories of Strength. His most recent book, entitled The Happiest Days of Our Lives, was published in 2007. Wheaton also wrote "Te Cura Ipsum", one of the TOS-based stories for Kakan ni Shinkou, Tokyopop's second volume of Star Trek: The Manga. [15]

Wheaton currently writes a weekly column for LA Weekly. [16] In addition, he is currently writing a science fiction novella (potentially a novel), which he describes as "…a noir kinda thing, set in a dystopian future Los Angeles. (It's not Blade Runner. […] I've taken the appropriate world-building steps to make sure it doesn't go there.) [17]

Wheaton is also a contributor to the YouTube channel/production company Geek and Sundry, for which he produces and hosts the series Tabletop. Wheaton, a self-professed lifelong gamer, plays various board and card games with friends (from acting, his personal life, and the internet), including Rod Roddenberry [18] and Jeri Ryan (with whom he played Star Trek Catan). [19] 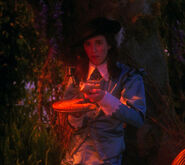 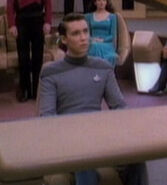 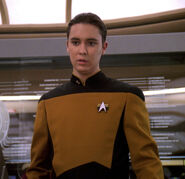