William Bebow is an actor who played a Romulan senator in Star Trek Nemesis and an alien soldier in the Star Trek: Enterprise second season episode "The Communicator". As a background actor he received no credit for his appearance and was identified by the name tag of his costume which was sold off on the It's A Wrap! sale and auction on eBay. [1]

Bebow also appeared in the That's My Bush! episode "Mom 'E' D.E.A. Arrest" (2001, with Jim Jansen and Carrie Dolin), on Desperate Housewives (2011), The Big Bang Theory (with Holiday Freeman), and The Mentalist (2011), and in a supporting role in a deleted scene of the crime drama J. Edgar (2011, with Jack Donner, Zach Grenier, Stephen Root, Gary Werntz, David Clennon, Tom Archdeacon, and Manu Intiraymi). 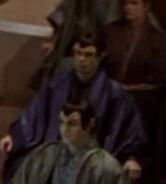 Alien soldier
ENT: "The Communicator"
(uncredited)
Add an image to this gallery

Retrieved from "https://memory-alpha.fandom.com/wiki/William_Bebow?oldid=2531900"
Community content is available under CC-BY-NC unless otherwise noted.