Memory Alpha
Register
Don't have an account?
Sign In
Advertisement
in: DIS performers, Performers, After Trek guests,
and 2 more
English

Doctor Hugh Culber
Wilson Cruz (born 27 December 1973; age 48) is the American actor who portrays Doctor Hugh Culber in Star Trek: Discovery. [1] He appeared as a recurring guest star in the first season, and was promoted to regular cast member for the second and third season.

He shared a dance with a pre-teen Mary Chieffo at a wedding, since he is a good friend of Chieffo's mother Beth. (AT: "Despite Yourself")

Cruz was the featured studio guest in the fourth episode of The Ready Room, discussing his character's resurrection from the grave in season two of the series.

Born in New York City with Puerto Rican heritage, he started his acting career by starring in the TV series My So-Called Life in 1994-1995, which also featured Paul Dooley as a recurring guest star. Cruz made his film debut in the 1995 biopic Nixon, surrounded by fellow alumni Robert Beltran, Bill Bolender, Richard Fancy, Annette Helde, Michelle Krusiec, Saul Rubinek, and Paul Sorvino. Cruz followed with the 1996 telefilm On Seventh Avenue, with Stephen Collins, Ronald Guttman, Josh Pais, and Anthony Zerbe. That year Cruz costarred in the sex comedy Johns, with Tony Epper. In 2005, Cruz appeared in Bam Bam & Celeste with John Cho. 2006 had Cruz in the comedy Coffee Date, costarring Leigh Taylor-Young. None of Cruz's later films made as much of a dent in the box office like his debut, but then Cruz was cast in the hit 2009 film He's Just Not That Into You, joined by Googy Gress and Cristine Rose.

Cruz appeared as Culber in 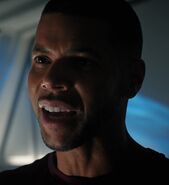