WizKids, Inc. is a Seattle, Washington-based gaming company primarily known for its production of the "Clix" series of "collectible miniatures games" (CMGs) which include HeroClix, Mage Knight, MechWarrior, and HorrorClix.

The company was founded in 2000 by Jordan Weisman, a veteran of the game company FASA.

The company was acquired by NECA in 2009 and began to release licensed Star Trek games in 2011.

Eight games have been (or will be) released by the company: 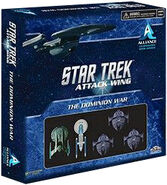 Retrieved from "https://memory-alpha.fandom.com/wiki/WizKids?oldid=2474517"
Community content is available under CC-BY-NC unless otherwise noted.