Linwood "Woody" Porter (born 20 April 1946; age 74) is an actor who appeared in several episodes of Star Trek: Enterprise and in two Star Trek films. He received no credit for his appearances. His costume from his recurring role as rear admiral in Enterprise was sold off on the It's A Wrap! sale and auction on eBay and was also worn by fellow background actor Devon Abner. [1] Porter filmed his scene for "Broken Bow" on 5 June 2001 on Paramount Stage 18.

Porter appeared as background actor in the 1997 video game Heavy Gear, which features Star Trek performers Scott Klace and Jerry Rector. He is probably best remembered for his portrayal of the unfortunate Dwight Edgar Garrison in the Six Feet Under episode "Someone Else's Eyes" (2002, with Joel Brooks, Dina Meyer, Stephanie Erb, Ed O'Ross, and Kellie Waymire). Archive footage of this appearance was also used on the DVD special Anatomy of a Working Stiff in 2004. More recently, he appeared as Judge James Hall in the short film Slick (2010, with Marybeth Massett, Ted Barba, Rosine "Ace" Hatem, and stunt coordination by Nancy Thurston). 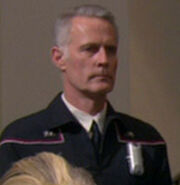 Retrieved from "https://memory-alpha.fandom.com/wiki/Woody_Porter?oldid=2701301"
Community content is available under CC-BY-NC unless otherwise noted.