Worf – Return to Grace Collection was a VHS collection released by Paramount Home Video in the US on 7 October 1997. It featured four episodes of Star Trek: The Next Generation focusing on the character of Worf and his discommendation arc.

The set was also given a release in Australia by CIC Video in 1999 with the same episodes (one on each tape) and cover art.

The US collection included an exclusive Playmates Toys figure, "Klingon Warrior" Worf. The Australian collection, however did not. 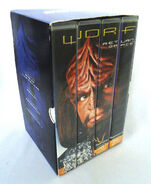