Yesterday's Son is a Pocket TOS novel – #11 in the numbered series, and the first book in the retroactively-designated "Yesterday Saga" – written by A.C. Crispin. Published by Pocket Books, it was first released in August 1983.

From the book jacket
The Romulans attack the planet Gateway, where Federation scientists are studying the Guardian of Forever – the mysterious portal to the past.

The starship Enterprise must protect the Guardian – or destroy it. But Spock has already used the portal to journey to the past. On the planet Sarpeidon, 5,000 years ago, Spock knew a beautiful, primitive woman. Now he has gone back to meet his son!

While studying the archaeological records of the now-destroyed planet Sarpeidon, a scholar aboard the Enterprise finds pictures of an ice age cave painting depicting a Vulcan face. After bringing this to Spock's attention, Spock realizes that his involvement with Zarabeth when he and McCoy were accidentally stranded in the planet's ice age has resulted in the birth of a child. Spock asks Captain Kirk for shore leave and after Kirk insists that Spock tell him why, Spock admits what happened in the past and that he must go to Vulcan and speak to T'Pau and ask her to petition the Federation Council for permission to use the Guardian of Forever to travel back to the past and retrieve his son. T'Pau agrees to intercede on Spock's behalf and Spock is granted permission to use the Guardian. Kirk, however has required from Spock that he be able to accompany Spock on his journey. On their way, they are joined by Dr. McCoy, who also intends to go, seeing as how he also remembers Zarabeth and has been working on and subsequently discovered a way to medically reverse Zarabeth's Atavachron conditioning so that she can return to the future along with them. Spock tells Kirk that he anticipated McCoy's desire to accompany them and so he asked T'Pau to secure permission for the three of them. Using the Guardian, they journey back into Sarpeidon's past and rescue his son. However, due to a miscalculation on Spock's part, they find a young man of twenty-eight instead of a small child, who tells them that his name is Zar and that his mother Zarabeth died in an accident many years before. Spock introduces himself but refuses to allow Zar to call him "Father." Zar shows Spock where Zarabeth is buried and Spock uses his phaser to cremate Zarabeth's remains.

Zar returns to the Enterprise and passes as a distant relative of Spock, who oversees his education and attempts to train him in Vulcan telepathic techniques. They discover that Zar is an unusually strong telepath for a Vulcan; he can establish contact without touching the other person. Zar becomes conflicted and hurt by his father's apparent refusal to acknowledge him.

The Enterprise is called back to Gateway to protect the Guardian of Forever from a Romulan intelligence raid. It is imperative to the security of the Federation that the Romulans not discover the Guardian's powers; if they cannot be driven away, Gateway must be destroyed. The Romulans place a force field around the Guardian and hide themselves behind a ground-based cloaking device. Zar volunteers to help Spock counteract the force field because he can sense whether Romulans are present even if he cannot see them. Their first try is unsuccessful, but when they rendezvous with Kirk the three men discover they are trapped on the planet; the Enterprise, with Montgomery Scott in command, is battling the Romulans (along with the USS Lexington) and cannot drop its shields to beam them up. They decide to try again, but Spock disables Zar with the Vulcan nerve pinch, wishing to spare him from danger. Kirk and Spock are captured and tortured by the Romulans. When Zar wakes up, he is able to telepathically sense their danger. He also realizes that his father cares about him, since he chose to protect Zar instead of Kirk, his closest friend. The Enterprise defeats the Romulan ships and a rescue party beams down. Zar creates a diversion by causing an explosion, allowing the others to rescue Kirk and Spock.

Once the Romulan threat is over, Zar decides to use the Guardian to return to Sarpeidon's past, but to a more settled location than the one he originally inhabited. Although Spock offers him a place among his family on Vulcan, there is evidence that Zar's return is crucial to Sarpeidon's unusually rapid cultural evolution. After a brief family mind meld with Spock, Zar enters the time portal.

"As I sit in the solitude of my cabin, I know I must begin considering precisely what I should do about the face on the wall of the cave…"

- Spock, contemplating about the future of his distant son in ice-age Sarpeidon

"That is tantamount to blackmail, Jim."
"Not tantamount, it is blackmail."

- Spock and Kirk, on going along for the journey into Sarpeidon's past

"Taking in account Doctor McCoy's predictable penchant for rushing in where angels fear to tread, I reasoned he would attempt this. There's usually a logical pattern to the good doctor's illogical pattern."
"Why you pointed eared, ungrateful–"

- Spock and McCoy, as Spock reveals that he anticipated and was given an extra security clearance for McCoy for the Guardian of Forever

"Next stop, Gateway. And the Guardian of Forever."

"I've got to hand it to you Spock, what a great place to spend our leave. Beautiful warm sunlight, soft breezes, the natives are friend– wha– what was that?"
"Probably a Sethar, Bones. A huge, very savage predator. Their favorite meal is chief surgeons, who don't have the sense to follow orders given by their commanding officers."

- McCoy and Kirk, as Kirk spooks McCoy on ice-age Sarpeidon

"Looks like you miscalculated a bit, Spock. But better late than never, right?"

"I would prefer you address me by my name. I find the appellation father inappropriate, when used by a… stranger."

"I'm sorry– I didn't realize– I was only trying to-"
"On Vulcan, what you attempted just now is regarded as a heinous crime. Forcing a meld, is an unforgivable intrusion of the spirit. You must never do so again. Do you understand?"
"Yes sir, I acted on impulse. It was wrong. I know better now, I won't ever forget."
"See that you do not, or I will not be able to continue your training."
"I suppose you could call it training, as if I was some stray animal you rescued. But I think it's much closer to the programming you do to your computers. I can't touch you! Why!?"

"The simple fact of my existence mattered to him. I don't. There's only one person Commander Spock cares deeply for, and that's… not me."

- Zar, commenting about Spock to McCoy

1999 reissue under The Yesterday Saga 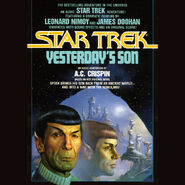