Yorktown, also known as Starbase Yorktown, Yorktown Base and Yorktown Station, was a massive Federation space station located on the frontier, near the Necro Cloud nebula, in the alternate reality. Containing millions of individuals, it was Starfleet's newest and most advanced base as of 2263 and was commanded by Commodore Paris.

Yorktown was constructed in lieu of a planetside settlement so as not to show geographical favoritism to any particular recently-admitted worlds.

Three years into a five-year mission as commanding officer of the USS Enterprise, Captain James T. Kirk applied for a vice admiral position at Yorktown. At the time, Starfleet's most technologically advanced ship was under construction there.

In 2263, the Enterprise docked in one of Yorktown's space lanes for resupply. From there, it was dispatched to the Necro Cloud on a mission to ostensibly rescue the stranded crew of Kalara's ship. In truth, Krall had lured the Enterprise into the nebula, where it was attacked and destroyed at the planet Altamid.

Marooned on Altamid, the surviving crew of the Enterprise discovered that Krall had used a Magellan probe to retrieve data from the Federation, including schematics of Yorktown, which he meant to attack. Launching a fleet of Swarm ships, Krall attempted to deploy a weapon known as the Abronath in Yorktown's life support system, in order to wipe out all life on the base and use it to strike other Federation worlds.

Piloting the 22nd century era USS Franklin into Yorktown in pursuit of Krall, Captain Kirk crashed the old Starfleet ship at Yorktown Central Plaza, then engaged with Krall, ultimately killing the despot before he could deploy the Abronath.

In honor of his heroics, Kirk was offered the vice admiral position at Yorktown, but declined in favor of continuing to command a starship. (Star Trek Beyond)

The Enterprise traveling through a space lane

The inner city of Yorktown

The command center at Yorktown Headquarters 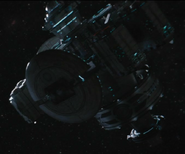 One of Yorktown's satellites when not in operation

Yorktown's structure consisted of a matrix of city-sized interlocking rings and radiating arms enclosed in a spherical translucent surface; Enterprise doctor Leonard McCoy likened it to a giant "snow globe" in space. Several of the station's arms reached the surface of the sphere and mounted doors large enough to admit starships into internal space lanes.

The arms of the starbase met at a central nexus point where a central plaza and Yorktown Headquarters stood. Due to the complex gravitational characteristics of the structure, the center of Yorktown contained a gravitational slipstream.

Yorktown contained a shipyard and was defended by numerous turrets on its surface as well as a network of satellites, all armed with phasers and photon torpedoes. The station's military and manufacturing capabilities were sufficient for it to pose a major threat to the Federation if captured intact by an enemy. It housed several million beings from across the Federation, including the family of Hikaru Sulu.

The station was divided into zones, such as arts/culture, parks/nature, sightseeing, and recreation. Attractions included museums, gardens, restaurants, nightclubs, and bars that were reputed to be excellent.

Public transporters were available to move between zones, and monorail-like trains were also operating. (Star Trek Beyond)

In the script of Star Trek Beyond, this facility was initially described thus; "YORKTOWN BASE. A massive FEDERATION STAR BASE on the edge of charted space. Built in conjunction with dozens of different alien Federation species. A nexus for all the nearby worlds that have been inducted into the Federation. Yorktown is large enough to house the millions of residents, visitors and workers who have just moved in. An idyllic multicultural hub invested with the spirit of everything the Federation stands for." (Star Trek Beyond - The Makeup Artistry of Joel Harlow, p. 12)

Yorktown was designed by Sean Hargreaves. According to Hargreaves, the initial design of Yorktown's arms did not feature windows looking into the passageway. However, this feature was added in order to depict the Enterprise and, later, the Franklin flying through the interior structure of the base. This addition also led to the sequence in which the Franklin rises up through a reflecting pool at Yorktown Central Plaza. The buildings in Yorktown were designed to match the real life buildings at the filming location in Dubai, United Arab Emirates. Also according to Sean Hargreaves, each of the arms of Yorktown was intended to be 17½ miles long. [1]

The CGI model of Yorktown was constructed by Hargreaves, a team of four modelers and two texturers at Double Negative studios in Vancouver, British Columbia, using 810 unique modular elements detailing sixty-four cityscapes. The sequence first featuring Yorktown in Star Trek Beyond consisted of 1,000 frames, depicting the 1.3 trillion polygon digital model of the base. Digital city arms, shell background, CG crowds, and air traffic were added by Double Negative to footage captured during a monthlong location shoot in Dubai. (Cinefex, No. 148)

A Yorktown type station was seen in the sky of a barren planet in the promotional music video for the Rihanna song "Sledgehammer".