Another named member of Yorktown's personnel, Deep C-Zar, appeared in a deleted scene from Star Trek Beyond.

These members of Akima's species were on Starbase Yorktown in 2263. One of these aliens, wearing civilian clothing, was walking with a member of Co-Co's species, on an exterior thoroughfare in the starbase, when the USS Enterprise made its way into the facility.

Another alien of this type was walking alone in a busy terminal during the Enterprise's arrival. (Star Trek Beyond)

This pair of aliens with bony-looking faces had extremely long fingers and were bald. They were walking inside a terminal at Yorktown while the USS Enterprise arrived there. They later passed through the same terminal near James T. Kirk, behind his back, when he was watching Hikaru Sulu's reunion with Ben and their daughter. (Star Trek Beyond)

Although these aliens were unnamed on-screen, a behind-the-scenes source has linked them to the name "snail". [1]

These female members of Co-Co's species were on Starbase Yorktown in 2263. One of these aliens, wearing an operations division Starfleet uniform, was walking with a fellow alien, on an exterior thoroughfare in the starbase, when the USS Enterprise made its way into the facility, as was another alien of this type, who was wearing civilian clothing, and walking with an alien friend.

They were played by unknown actresses. 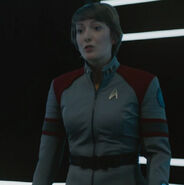 This sciences division doctor was one of the physicians at Yorktown who treated Kalara upon her arrival at the starbase. He left the room when James T. Kirk joined the team. (Star Trek Beyond)

This doctor was played by Italian soccer coach Carlo Ancelotti, who received no on-screen credit for this cameo part.

This boy was watching the USS Enterprise enter Yorktown in 2263. (Star Trek Beyond)

This alien boy was played by Oqwe Lin, Director Justin Lin's son.
According to Lin, his son chose his own appearance based on Yoda from Star Wars. [2]

This red shirt was portrayed by Luka Hays.

These two members of the Schlerm were at Yorktown when the USS Enterprise arrived there.

One of these individuals crossed an exterior thoroughfare in the starbase, together with a companion, whereas another was walking inside a terminal shortly after the Enterprise docked.

The latter passed near Spock straight after he was left standing alone by Nyota Uhura, she having just broken up with Spock. (Star Trek Beyond)

Both were played by unknown actors.

This woman enjoyed drinks with Montgomery Scott and Keenser during James T. Kirk's birthday party in 2263. (Star Trek Beyond)

This young girl was the daughter of Hikaru Sulu and his husband Ben. Sulu kept a photograph of her on the helm console aboard the Enterprise.

In 2263, she was living on Yorktown with Ben, and met Sulu at the spacedock when the Enterprise arrived for resupply. She survived Krall's attack on Yorktown. (Star Trek Beyond)

Sulu and Ben's daughter was played by young Filipina Rihanne Quionn. [3]
It is possible this girl was meant to be the alternate reality counterpart to Demora Sulu, but Sulu actor John Cho did not think she was, and did not remember if the character had been given a name on set. [4] In Star Trek: Boldly Go, Issue 12, Kirk confirmed that Sulu's daughter's name was in fact Demora Sulu (β).
In an Entertainment Tonight interview with John Cho, he claimed that the photo seen on his console was taken out of a picture frame from Walgreens. [5]

Although these aliens were unnamed on-screen, a behind-the-scenes source has linked at least one of them to the name "egghead". [6]
They were portrayed by unknown actors.

A pair of Wilbur's species workmen employed at Yorktown when the USS Enterprise made its way into the starbase in 2263. They wore goggles, a transparent hard hat on their heads, and a dark utility suit. (Star Trek Beyond)

They were portrayed by unknown actors.
Community content is available under CC-BY-NC unless otherwise noted.
Advertisement